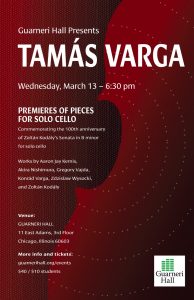 Guarneri Hall is honored to welcome world-renowned cellist Tamás Varga for a concert on March 13 that includes two US premieres of pieces he commissioned (all pieces are Chicago premieres except for the Kodály Sonata), and a master class on March 14. Read about Varga below, and in more detail on the March 13 event page, where you can purchase concert tickets and RSVP for the master clas).

Born in Budapest in 1969, Tamás Varga has been principal cellist of the Vienna Philharmonic for over twenty years and his solo performances with this orchestra are among the highlights of his illustrious career. He has appeared as a soloist in every continent and has collaborated with such famous conductors as Ádám Fischer, Seiji Ozawa, Giuseppe Sinopoli, Pinchas Steinberg, and Michael Tilson Thomas. Together with Tilson Thomas, he shares the deep conviction that one of his fundamental responsibilities is passing on knowledge and experience to young musicians. Varga gives masterclasses throughout the world, most recently in Australia, China, Vietnam, Japan, and the USA (New York, Berkeley, Miami and Chicago). Projects such as his participation in a 2018 tribute concert by the National Youth Orchestra of Chile and Venezuela, an invitation extended by Gustavo Dudamel, reinforce Varga’s belief in working together with young musicians in order to discover the connecting, strengthening, and redeeming power of music.

A committed chamber musician, Varga has recorded over thirty CDs for Camerata Tokyo, Naxos, Hungaroton, King Records, and Cavalli Records. In October 2018 he recorded Bach’s complete Cello Suites for a second time, offering an intriguing comparison between the sounds and interpretations afforded by their performance on a baroque instrument (2018) and a modern one (2004).

Particularly close to Varga’s heart is a recent project involving five world premieres of contemporary works for solo cello composed at his request by A.J. Kernis, A. Nishimura, G. Vajda, L. Vidovszky, and Z. Wysocki (the last of whom had already dedicated his Cello Concerto to Varga). The unifying element of these works is that they were all written as a response to Zoltán Kodály’s famous Sonata for Solo Cello, which was premiered in 1918. The works were performed as part of two festivals of contemporary music, in Budapest (Café Budapest) and Vienna (Wien Modern).

In these times, all our events are virtual! Normally, however, most live events we sponsor or partner on are held at: