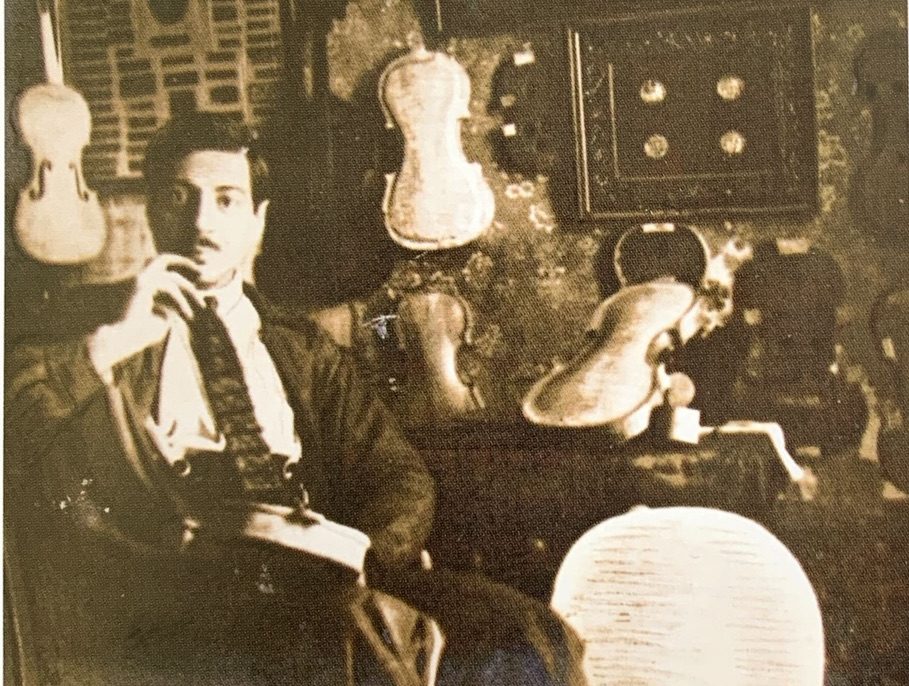 Alfredo Contino, Heir to a Legacy

Alfredo Contino (1890-c.1963) was a minor master of violin making, but a master nonetheless. He belongs to a group of artisans who were heirs to a school of instrument making in Naples covered in another article on this site. That lineage began with Alessandro Gagliano (1665-1732) and continued through no less than 11 other Gagliano family members, along with a host of other makers, well into the 20th century. As it happened, the group of instrument makers that included Contino would come to mark the last of this centuries-old Neapolitan tradition.

Sources are in agreement as to Contino’s birth date, February 22, 1890, in Naples. But the year of Contino’s death is reported variously as 1954 (Nicolini), “after 1970″ (Ingles and Hayday), and “late 1960s” (Moenning). Artemio Versare, respected author of a book on stringed instruments of the Emilia Romagna area as well as of two exhibition catalogs, Tre secoli di liuteria Italiana and La famiglia Guarnieri e le copie del novecento italiano, writes that Contino died in 1963, and this seems to be the most reliable information we have today.

Contino labeled his instruments “allievo di V. Postiglione.” Most biographers have understandably taken this as confirmation that Contino was a student of the great Neapolitan maker Vincenzo Postiglione, on whose work the majority of Contino’s output is clearly based. Contino did verifiably succeed as head of the Postiglione workshop after the latter’s death in 1916. But in 1982, the William Moennig & Son firm published a piece in their World of Strings periodical asserting that Postiglione was understood never to have provided formal training in violin making. Moennig suggests that makers like Contino and Giovanni Pistucci, both of whom claimed to be pupils of Postiglione, must have learned from the master by observation alone. Moennig’s source for that information was likely their close affiliate, the late violin expert Dario D’Atilli (1922-2004). D’Atilli’s knowledge of insider details about 20th-century Italian makers was legendary, and his word should be taken seriously even if it is only anecdotal.

A Question of Origin

The claim that Postiglione had no pupils raises the question of whether Contino had already had some preliminary training in violin making when he joined the Postiglione atelier. If so, we don’t know the source of such training, but it might have come from any of a number of makers active in Naples just after the turn of the last century, such as Francesco Verzella, Raffaele Calace, Armando Altavilla, Giuseppe Tarantino, or Giovanni Tedesco. In particular, Giovanni Pistucci seems a likely candidate to have provided  Contino with early training. Pistucci, too, claimed a connection to Postiglione. He certainly would have needed help with the production of his vast output, and so might have welcomed an eager and talented young assistant. Whatever the case, Contino’s early work is easily confused with the later work from the Postiglione atelier and it is evident that the younger maker had a strong hand in the final years of the Postiglione production.

A number of features make Contino instruments relatively easy to identify. As Postiglione did with his later instruments, Contino treated the wood of his instruments with potassium dichromate. At its most subtle, this chemical produces a pleasing “olive oil” tint that recalls the look of earlier Neapolitan work. But at times, the use of potassium dichromate can overpower the overall varnish, giving the instruments a greenish hue that despite being visually undesirable doesn’t seem to affect their tone.

Contino also branded his instruments on the button in the manner of Postiglione.

Contino sometimes inscribed the interior of his instruments with the mark of the jettatura, a symbol that had become popular in Southern Italy from the 19th century. The jettatura is best understood as “the curse of the evil eye,” through which the accursed brings bad luck to anyone they look upon. The application of the symbol was regarded as a way to ward off such bad luck. The specific significance of the symbol for Contino remains unknown, and the tradition of the jettatura has receded into obscurity.

Most of Contino’s instruments were based on Stradivari, Guarneri, or Gagliano models. Most of his production seems to have been prior to 1950. The earlier production tends to be more carefully executed, although very good instruments from later dates can be found.

A Legacy all his Own

Notwithstanding the Postiglione connection, Contino made his own mark with a substantial output that was admired in his time; Contino won a gold medal at the Padua exhibition of 1932 and exhibited his work in Rome. The instruments of Alfredo Contino are particularly respected for their tone and continue to serve musicians well to this day.