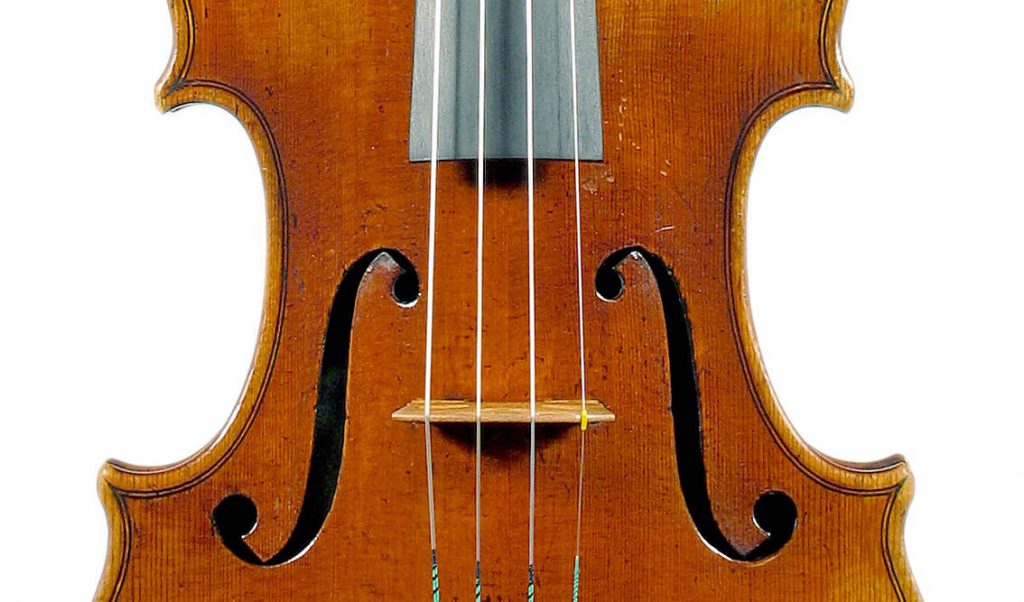 Antonio Stradivari, deservedly the most famous violin maker of them all, was born in 1644 and worked in the northern Italian town of Cremona. Stradivari’s first known instruments date from the 1660’s but his output seems to have been small prior to the 1670s. A vision for the instrument and extraordinary business acumen quickly set Stradivari apart from other makers. By 1690 he had become the dominant force in bowed string instrument building in Europe, a status he retained until his death in 1737.

In the Footsteps of the Amati Family and Beyond

As a citizen of Cremona, Stradivari’s natural inheritance included a long-developed violin-making tradition. Andrea Amati (1505-1577), the patriarch of the Cremonese violin-making, began working sometime in the second quarter of the 16th century, eventually securing the patronage of some of the most important European nobles of his time. Three successive Amati generations survived famine and plague to prosper as instrument builders, innovating and refining, and cementing Cremona’s reputation as the source of the finest violins in the world.

A generation of instrument builders that emerged in the midst of the Amati dynasty included superb makers from the Guarneri, Rogeri, and Rugeri families. Most notably, Bartolomeo Giuseppe Guarneri “del Gesu” (1698-1744) produced instruments that rival great Stradivaris to this day. But in terms of innovative design, quality of material and finish, and sheer quantity of output, the Stradivari atelier exceeded all of the other classical Cremonese makers combined.

Even with the Amati influence, Antonio Stradivari’s fully-developed designs are distinct from their antecedents in Cremona, and their origins are not always readily apparent. Stradivari certainly would have been aware of the violin forms in Cremona that preceded him. But he made confident and bold instruments in an unprecedented manner from the start of his career and began innovating with his earliest works.

The Passing of the Torch

In 1684, Nicolo Amati (1596–1684), the third-generation patriarch of the Amati family, died. This may have helped pave the way for the rise of Stradivari who, by the 1690s, was building large numbers of violins on a revolutionary pattern that would come to be called his “Long Model.” The “Long Model” design captured more airspace and utilized powerful arching unlike that of other Cremonese makers. The resulting instruments afforded the player access to more depth, sonority and power than that produced by the instruments of Stradivari’s contemporaries. The 1690s also mark Stradivari’s shift to extravagant varnishes of brilliant and intense colors that would become another much-admired hallmark of his output.

Despite the troubles in Cremona, Stradivari prospered as others struggled. Notarial archives of the city attest to Stradivari’s real estate holdings, the interest-bearing loans he extended, and the status he enjoyed as one of the wealthy elite of the city. Stradivari had secured a near-monopoly and production from his workshop began to accelerate to meet orders from an international clientele. Stradivari’s large output from this period, more than the output from all other Cremonese makers combined, attests to steady demand the shop must have labored to meet even as Cremona’s local economy faltered.

By 1700, the Stradivari workshop dominated string instrument making in Cremona, as evidenced by the far smaller output of contemporary work from Stradivari’s competitors. In addition to Stradivari’s visually dazzling and tonally powerful instruments, other factors contributed to the disparities between Stradivari and his competitors. The war of Spanish Succession saw Cremona occupied by French forces in 1701, damaging the local economy. Conflict strained the city on and off for over a decade afterward, further testing the economy and probably fraying nerves. In 1713, the signing of the Treaty of Utrecht gave Austria control over the region. The heavy taxes the Austrian government imposed on Cremonese citizens further depressed the local economy.

Throughout his long life, Stradivari restlessly experimented, continually adapting and manipulating the forms with which he began his career. He discarded the “Long Model” from the 1690’s sometime around 1699, but lessons learned from the increased air space of the “Long Model” stayed with him; around 1709, he again began to build large form instruments.

Stradivari’s large form violins from 1709-1717 are built on a broader pattern than the “Long Model” Instruments of the 1690’s. Their unprecedented volume of airspace and highly evolved arching are hallmarks of these violins that have been the most coveted by soloists over the centuries since. The large form Stradivari instruments built from 1709 or so remain some of the most powerful, sonorous, and brilliant violins ever created, rivaled only by those of Giuseppe Guarneri “del Gesu” from the late 1720’s until his death in 1744.

The extraordinary level of execution and finish and the sheer quantity and consistency of production from the Stradivari shop through these years defies imagination. From 1714 through 1716, the workshop annually produced as many as 16 of the boldest, most glamorous, and most powerful musical instruments of all time. Consistent production of such high quality and quantity would present challenges to any artisan workshop today, even with access to power tools and modern lighting. That the Stradivari shop generated this output without precedent and without the technology enjoyed today is a testament to the vision, multi-faceted skill, business acumen, and integrity of a true genius.

Stradivari’s revelatory developments weren’t confined to the violin. From around 1707 he began to build cellos on an ingenious reduced pattern, arched for ample power, that would come to be known as the “Forma B.” The “Forma B” facilitated the greater mobility that was increasingly being expected of cellists, and gave the performer access to unprecedented power to project. Some 20 such instruments survive today, and they have come to represent the optimal standard dimensions for the cello.

Ahead of His Time

The power and brilliance of the mature works of Stradivari create the possibility of a previously unimaginable degree of presence for a soloist on violin or cello in a modern, 3,000-seat concert hall. Stradivari was substantially ahead of his time in building instruments that could produce so much sound; although performance venues large enough to make this level of power desirable would become increasingly common from the late 18th century, they were almost unheard of in Stradivari’s day.

The power of the Stradivari designs, and the quality and quantity of the instruments he produced changed the course of history for instrument makers, composers, and performers. In the decades and centuries after they were built, large model Stradivari violins from after 1709, along with the “Forma B” cellos from after 1707, must have played a role in the development of the modern concept of a string soloist playing for mass audiences in increasingly large public venues. By the time Mendelssohn wrote his famous Violin Concerto, the more heavily orchestrated accompaniment made possible by Stradivari’s remarkable innovations had come to be taken for granted. Without Stradivari’s innovations, music performance might have taken a different course altogether.

Stradivari instruments have defied all attempts at replication. They are unique artifacts of a lost art, both unsurpassed in physical beauty and functionally superior to their modern counterparts. Three hundred years after their creation, the instruments of Antonio Stradivari remain the preferred choice of the most discerning contemporary performers. Any musician lucky enough to live with a Stradivari instrument on a daily basis knows that there is no artisan more worthy of the unchallenged reputation and mystique that Antonio Stradivari enjoys.