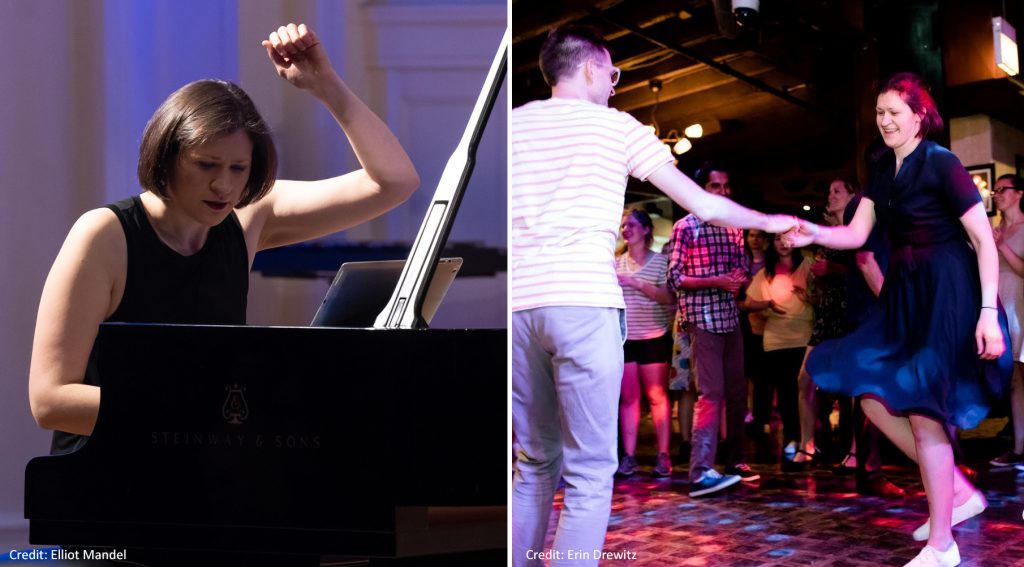 Three and a half years ago, I was being swallowed by my work. Everything was about concerts, practicing, and touring. As many classical musicians have, I’d fallen into that dreadful way of thinking that when I wasn’t practicing, I was wasting time. I spent a good portion of that summer of 2018 re-evaluating my commitments and it hit me: I needed a hobby. As I cast about for a fun diversion, I remembered when a friend had taken me to the Green Mill Jazz Club for the first time. I was totally enamored by the power of seeing a big band perform live. I asked what those people were doing out on the dance floor and I first heard the words, “swing dancing.” It stuck in my memory. I was in love with swing dancing even if I didn’t know it yet. If you had told me back then that a few years later I’d be swing dancing in front of other people, I probably would have laughed. Play the piano in front of hundreds, or even thousands of people? Sure, but dance in public? No way.

There is nothing quite like spending one’s life honing a high-level skill, only to start from scratch in another discipline. My first swing dancing classes were a study in humility. While the teacher made everything look so graceful, I couldn’t get past hearing, “the music is in 8 but you dance in counts of 3 and 6.” I struggled in classes, but kept going because each time I went, I got a glimpse of what the possibilities could be when my instructor would grab me and swing me across the ballroom for half a song and pass on his inherent gracefulness to me. Swing dancing is deceptively complicated. In theory, the basic steps seem easy enough: slow-quick-quick-slow or quarter-eighth-eighth-quarter. But in practice, swing dance requires fluid knowledge of the music, knowledge of the possible dance moves, and the ability to counterintuitively dance the steps differently from what seems correct.

Eventually, with some basics behind me, I began to search for outlets for my new hobby. I learned that there were social dances all over Chicago, organized by the many local swing dancing societies. It was here, in social dancing, that my true learning and fuller appreciation began. I knew the steps, but what I didn’t yet understand was the depth of communication that was possible on the dance floor. I also was only just beginning to see how addictive dance could be! Three and a half years later, I now lovingly joke with my swing friends about needing to get my “fix” if it’s been too long since I’ve had a dance.

Clearly I’m not the first person to become passionate about swing dancing and the sense of connection it brings. In July of 2020, a Washington Post article “Someday We’ll Hit the Dance Floor Again. And it will be Glorious” described the great loss humanity has suffered as a result of the coronavirus, through the lens of swing dancing:

That’s really the key: immersive human contact, where you’ve stepped away from daily life. The dance floor is a playground where you can meet people without having to say anything, where everyone agrees that certain barriers are down. It’s okay to approach a perfect stranger. It’s fine to say no. Say yes,  and your commitment can be as brief as three minutes.

This is in line with what most dancers say about why they swing: that it affords endless possibilities, that nothing feels better than being out on a wood floor in cloth-soled shoes swaying to a live band, even if it’s just for one song. For me, it’s nearly the same thrill that I get from playing chamber music, where the intimate contact and the subtle ways of communication create a deeply shared expression of the artistic work.

Writing in the Lake Champlain Weekly nearly a decade ago about my newly-formed chamber duo, Benjamin Pomerance said:

The lifeblood of the chamber musician is collaboration… Duos appear to be the most delicate construct of all, two people striving for an ultimate ideal of togetherness, seeking to speak with a unified voice.

When sitting at the piano, I often find myself either leading or following, but more often simultaneously doing both. As Pomerance noted, duos are two people striving for an ultimate ideal of togetherness. In swing, one must respond in a split second to a cue by touch from one’s partner. In chamber music the communication is by sight and mostly sound. In both dance or chamber music one must be completely “in the moment,” and if you take a second to “think” about the message your partner sent you, the moment is gone.

Swing dancing has been eye-opening to me from the time that I began dancing in public. Swing dancers have taught me to be so much more fearless in the face of new concepts and how to look like I’m having fun even when I have no idea what I’m doing. In essence, swing has brought me more joyfully into the present when performing. It’s taught me how deeper listening can breed fantastic responsiveness and adaptability in music making. More than just a hobby, swing dancing has made me a better chamber musician.