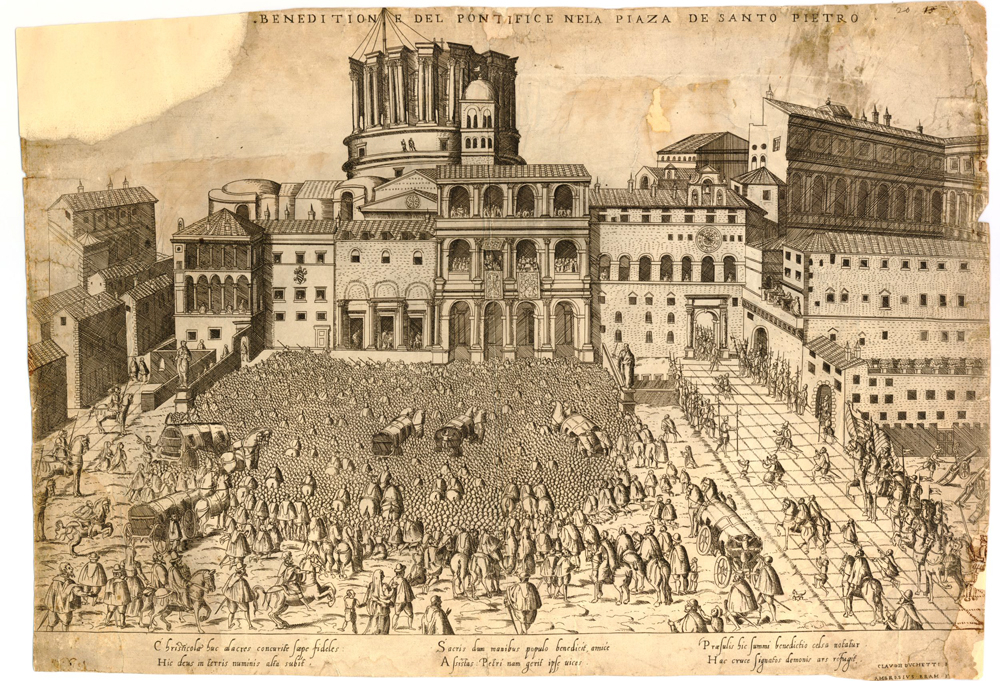 David Tecchler is widely regarded as the most important maker of the Roman school of instrument making. German by birth, Tecchler emigrated to Rome at the end of the 17th century and ran a highly successful business there for roughly 50 years.

Rome in the Baroque Period

During the Baroque period (circa 1600-1750) Rome was a major center of culture—a vibrant artistic city still bright with the afterglow of the Renaissance. Papal and aristocratic patronage brought famous painters, sculptors, architects, and musicians to the city on an ongoing basis.

Rome is also home to one of the oldest musical institutions in the World, the Accademia Nazionale di Santa Cecilia, founded by a decree from Pope Sixtus V in 1585. Many prominent musicians have been associated with the Academy, including Arcangelo Corelli as well as Alessandro and Domenico Scarlatti.

The preeminent Italian violinist and composer Arcangelo Corelli (1653-1713) bears special mention. Credited with playing a key role in the development of the sonata and concerto genres Corelli was an international star whose career paralleled the birth of the orchestra in Rome. Surviving records show that from about 1680 until his retirement in 1709, Corelli led practically every performance in Rome that utilized an ensemble of 10 or more musicians. Among the performances he led were some of the most momentous events of the day: the coronation of Pope Innocent XII, which brought together an orchestra of 150 strings; the celebrated Monday concerts in the palace of Cardinal Ottoboni; and the concerts of the Palazzo della Cancelleria, where he served as first violinist and conductor. In such a thriving musical environment, there would have been a steady demand for skilled musical instrument makers.1

David Tecchler, A Bavarian in Rome

David Tecchler was likely born in Augsburg, Bavaria around 1666. Little is known of his early life, his training, or when he actually moved to Italy. There is even uncertainty about his original family name: “Tecchler” was likely an Italian spelling of a German name such as Dechler or Teckler. Previous writers have asserted without citation that Tecchler made stops in Venice and Cremona before settling in Rome. While this is certainly possible, there is no direct evidence that he was in either city. What is verifiable is that on December 9th, 1696, Tecchler was welcomed by the Veneranda Arciconfraternita del Campo Santo Teutonico, a German fraternal organization. So he was in Rome by then and, based on the original label in one extant cello, Tecchler was building instruments in Rome by 1697.2

Tecchler appears in the Roman census returns for the first time in 1698, when he is listed as a chitarraro (luthier). Civic records also reveal that in 1698, Tecchler married Agnese Heringer, a widow whose first husband was a luthier from a prominent family of expat Füssen lute makers. Agnese herself was from a family of guitar and mandolin makers. As in most cities, the community of artisan instrument makers in Rome and particularly the German expats must have been a tight-knit group. Tecchler is listed on the marriage certificate as the son of quondam Joannis, from Augusta (Augsburg) in Germany. The records of the Arciconfraternita del Campo Santo Teutonico state that Tecchler died in 1747 and was buried in the Teutonic cemetery.3

In Rome, Tecchler would have been part of a community of luthiers with a similar background to his own: German artisan emigres who had set up shop in Italy, where there was continued demand for their work. The ravages of the Thirty Years War (1618-1648) had left Germany in a weakened economic state, which probably contributed to emigration away from that country. However, the establishment of a professional guild of lute makers in the Bavarian city of Füssen in 1562 seems an even more important factor in the relocation of instrument builders. The guild, the first of its kind in Europe, strictly regulated the number of luthiers allowed to work in Füssen. This led many trained instrument makers to leave Füssen and emigrate to various European capitals such as Vienna, Paris and Prague. In Italy, Venice was a popular destination, but a number of luthiers also migrated to other Italian cities including Bologna, Naples, Padua, and Rome.

During his long working life, Tecchler produced a number of violins and cellos. Not surprisingly these instruments show the influence of two of the most important and influential makers of the day: Nicolo Amati and Jacob Stainer. He also made violas, although those are quite rare. One example of a viola built circa 1730 is inscribed on the original label: La mia terza viola (“my third viola”). There are some other instruments, including a fine and rare archlute in the collection of the Metropolitan Museum of Art in New York. But what Tecchler is especially known for are his magnificent cellos. Built to grand proportions, Tecchler cellos have long been admired and played on by important cellists including Emanuel Feuermann, Lynn Harrell, Samuel Mayes, and Bernhard Romberg, to name just a few.

There is no documentary evidence of an apprentice or assistant in Tecchler’s workshop. While the presence of one cannot be ruled out (perhaps in an undocumented arrangement), it is also possible that Tecchler worked alone. His long working life would certainly support the large output of the shop, and the consistency of the production points to the work of an individual artisan. If Tecchler had help, it was probably in a limited capacity.

Tecchler did have a son, Carlo Alberto, but he does not appear to have been a violin maker. The Henley dictionary of violin and bow makers has an entry for one Andreas Tecchler, listed as a son or brother of David Tecchler. There is, however, a lack of definitive proof of the existence of such a maker. The same situation exists for the violin maker Antonius Hieronymus Tecchler, although a violin exists with a label indicating that he was David Tecchler’s nephew.4 Given the large number of forged Tecchler labels that have appeared, the existence of such labels with unverifiable names can hardly be regarded as proof of anything.

While Tecchler may not have directly trained an apprentice, his work had a profound impact on instrument making in Rome. As the founding father and most distinguished member of the Roman school, Tecchler’s successful blending of German and Italian influences became a model for the Roman makers. This model was especially effective in the construction of cellos, for which Tecchler and his followers are renowned.

Read a related article about a Tecchler instrument here.