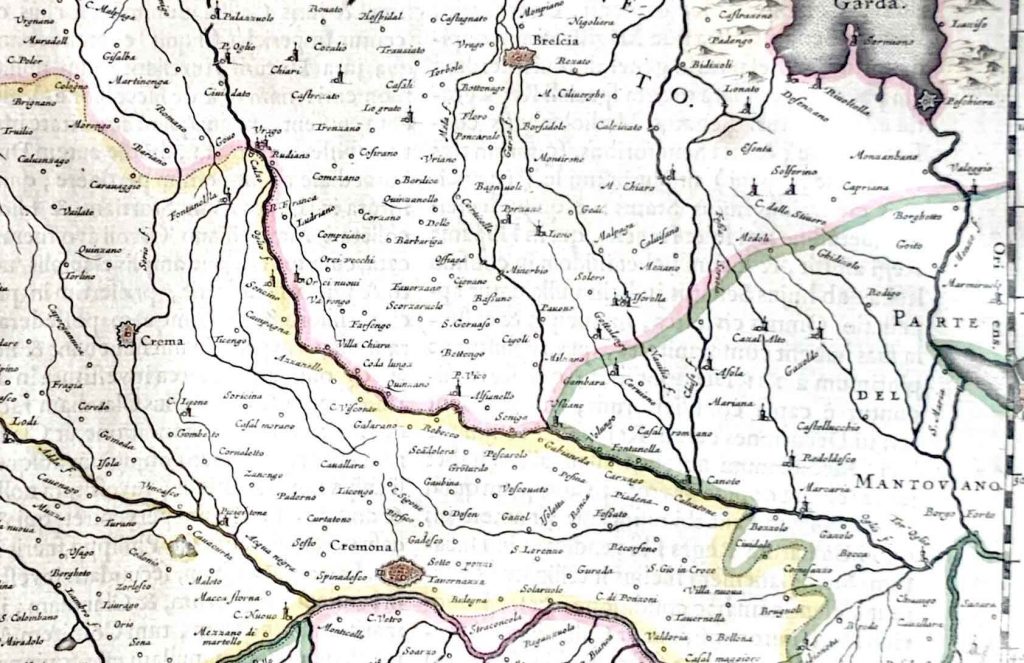 Giovanni Battista Rogeri, Part One: A Tale of Two Cities

The origins of the violin are shrouded in mystery. Instruments closely resembling the violin begin to appear in paintings dating to the early 16th century but who made the first violins and where they worked remains unclear. The first violin was probably born in one of two towns in northern Italy, either Brescia or Cremona. Whatever the early history, by a twist of fate, violin-making in the two cities would eventually become intrinsically linked.

By the mid-16th century the production of violin-family instruments was flourishing in both Brescia and Cremona. 16th century Brescia was home to a group of luthiers producing a wide range of instruments including lutes, viols, and other bowed string instruments. Gaspar da Salo was the first known violin maker in Brescia, also making citterns, violones, double basses, violas and violas da braccio. Archival records list the names of no fewer than eight bowed string instrument makers working in Brescia during that time: da Salo, Micheli and Peregrino Zanetto, Battista Doneda, Francesco Inverardi, Palanzino Palancini, Gugliemo Frigiadi, and Giovita Rodiani.

Meanwhile, in 16th century Cremona the building of instruments originated with and was monopolized by a single family, the Amatis, whose production was almost exclusively dedicated to the violin family of instruments. By the 17th century, the name Cremona had become synonymous with the violin. The Amati family deserves much credit for Cremona’s rise and dominance of the trade, but another critical factor was the Italian Plague of 1629-1631.

The Black Death and the Fate of Italian Violin Making

The Italian Plague of 1629–1631, also referred to as the Great Plague of Milan, decimated large numbers of people as it swept across Italy. Approximately a third of the Italian population died, with some cities losing as much as half of their citizens.

The plague cost the craft of violin making two of its most important makers and altered the course of violin-making: Hieronymus Amati in Cremona and Giovanni Paolo Maggini in Brescia both met their ends in the 1629–1631 plague. Maggini is presumed to have been a student of Gaspar da Salo, and his death in 1630 put the rich violin-building tradition in Brescia on pause for almost 50 years. Although city archives record a handful of registered instrument makers working in Brescia in the mid-17th century, none of their works are known to have survived.

The survival of violin maker Hieronymus Amati’s son Nicolo Amati saved Cremona from the same fate as that of Brescia. In the decades that followed the plague, Nicolo Amati rebuilt Cremona’s legacy as the violin-making capital of the world and trained an entire new generation of makers. Ironically, Nicolo Amati indirectly paved the way for the return of violin making to Brescia through one of his apprentices, Giovanni Battista Rogeri, who took up residence in Brescia around 1664, reviving and sustaining the craft there for decades

Giovanni Battista Rogeri was the only important luthier of the 17th and 18th centuries to work in both Brescia and Cremona. Rogeri’s production reflects the influence of both of these two important centers of violin making.

Nothing is known of G.B. Rogeri’s birthdate or his early life. His labels tell us that he lived in three different cities:

Bon is an abbreviation of Bononiensis, meaning “from Bologna;” alumnus indicates that he apprenticed in the workshop of Nicolo Amati in Cremona, and Brixiae is Latin for Brescia, where he made his violins.

Historical records confirm Rogeri’s time in Cremona and Brescia. In the 1661 and 1662 census returns of the Amati household, he is listed as an apprentice of ages 19 and 20, respectively. By 1664 Rogeri had left Cremona and settled in Brescia, where he married Laura Testini on May 29th, 1664, in St. Giorgio Church.

Rogeri’s move to Brescia was likely a business decision. Opportunities for a young luthier in mid-17th century Cremona would have been limited by the near-monopoly of the Amati family. With its rich musical history and dormant instrument-building culture, Brescia must have looked like a promising destination for a young maker with the best training in the world.

Rogeri’s work in the 1660s is little-known, but by the 1670s, the Rogeri workshop had become quite active, making instruments of notably fine quality. A Brescian civic document of 1688 records Giovanni Battista Rogeri as a violin maker, and also his wife, two sons of the same trade, and three daughters.  The two sons who assisted Giovanni Battista were Pierre Giacomo Rogeri and Giovanni Paolo Rogeri. Another probable assistant was Gaetano Pasta, whose work shows the strong influence of G.B. Rogeri.

The End of an Era

Following Giovanni Battista’s  death around 1705, his son Pietro Giacomo succeeded him and continued the business. Pietro Giacomo’s death in 1725 cut short the Rogeri family run of 50 or so years as Brescia’s leading violin makers and marked the end of classic violin making in Brescia.

[Part 2 will explore Rogeri’s fusion of the Cremonese and Brescian violin building principles.]