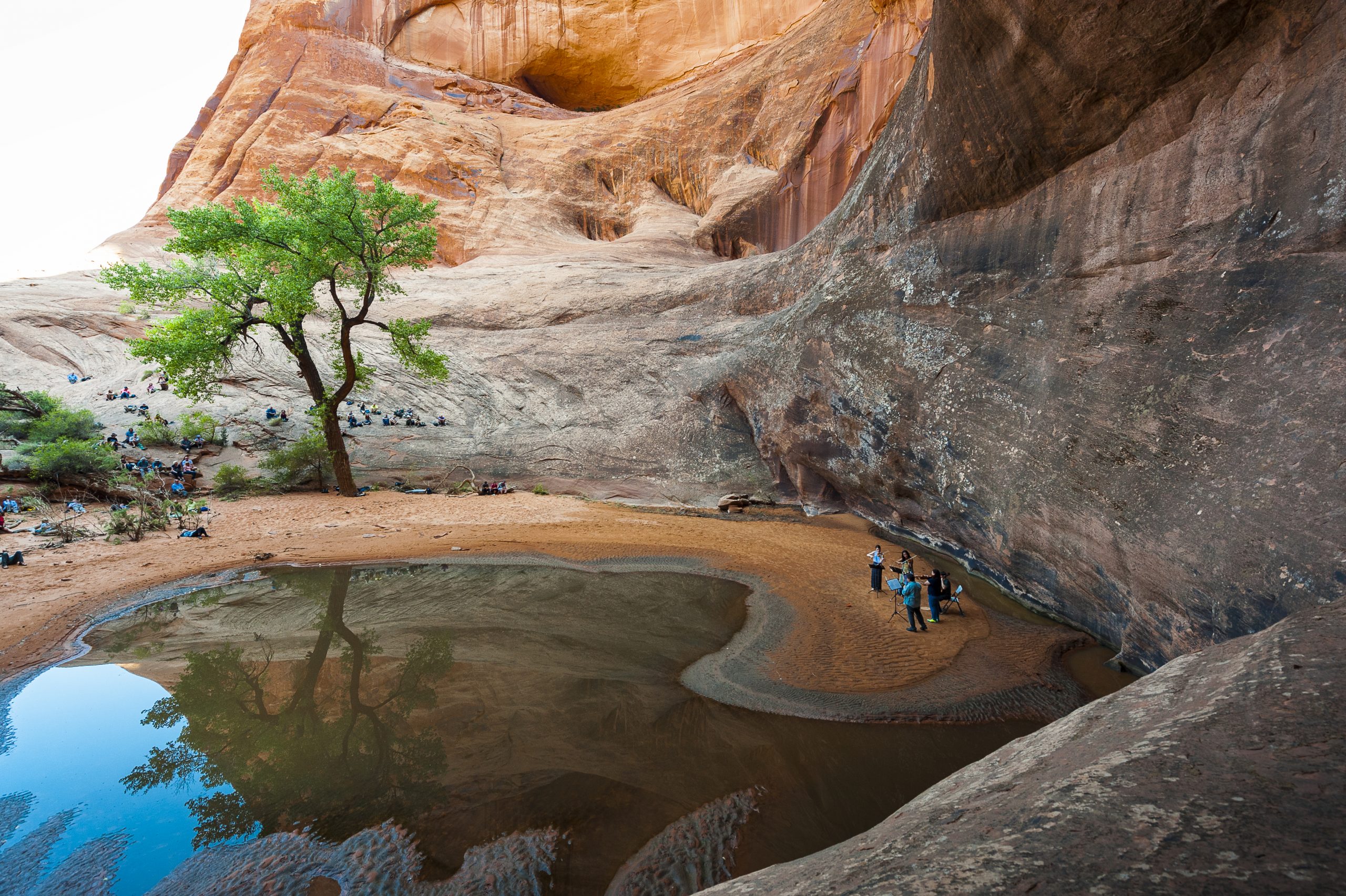 When New York-based violist and Artistic Director Leslie Tomkins and pianist, conductor, and Music Director Michael Barrett visited Moab, Utah in 1992, they were captivated by the red rock vistas. Inspired to combine the magical landscape with the joys of music-making, Tomkins and Barrett founded the Moab Music Festival. The Moab Music Festival (MMF) has gone on to win numerous awards for its distinctive programming, stellar performances, and unique approach to presenting great music in spectacular natural settings.

MMF presents approximately 20 concerts during its 2-week festival, featuring an impressive roster of internationally acclaimed artists who perform at various venues from private area ranches, the charming Star Hall in downtown Moab, private homes, and truly unique outdoor venues. Imagine experiencing hearing musical masterpieces in a pristine Colorado River wilderness grotto reached only by jet boat. How about a Music Hike to a concert at a hidden surprise location in and around Moab? Or, for a truly immersive experience, listeners can book tickets on two multi-day Musical Raft Trips.

All of this works because of the spectacular artistry of the musicians who gather each year for the festival. It works because of the unique natural beauty of southern Utah and the MMF’s adventurous leadership that has so imaginatively utilized the various landscapes of Moab.

On September 2nd, audience members will take a jet boat down the Colorado River through spectacular red rock canyons to “nature’s own concert hall” (The New York Times) – an acoustically perfect wilderness Grotto carved from the surrounding red rock walls. Virtuosos Jason Vieaux, guitar, and Kristin Lee, violin, open the concert with Bach, The Red Violin, and a duo by Vivian Fung. The Junction Trio creates a contrasting sonority with Beethoven’s majestic “Archduke” Trio. The last of his piano trios, the “Archduke,” exhibits the profound nobility, breadth, and depth that define Beethoven’s later works. A light reception with the artists precedes the glorious boat ride home.

On September 4th, the MMF tackles a challenging subject with a program entitled Lost Freedom: Japanese American Confinement in the U.S. The program’s centerpiece is a world premiere of a Moab Music Festival commission by Composer-in-Residence and violist Kenji Bunch. Narrated by actor and author George Takei, Takei revisits his past growing up in Japanese American confinement camps during WWII as he honors three living Japanese American composers. Takei will lead the audience through a dark part of American history that saw Japanese Americans stripped of their property and liberty, including a glimpse of Moab’s Citizen Isolation Center at nearby Dalton Wells. This new work, by Kenji Bunch, honors those individuals. Percussionist/composer Andy Akiho plays several of his works, joined by MMF musicians. Compositions by Paul Chihara, also a confinement camp survivor, fill out this special concert. The concert takes place at the Red Cliffs Lodge, north of Moab, overlooking the Colorado River and surrounded by towering red rock walls.

From Jazz to Mozart

The 2021 MMF will feature a wide range of musical styles and artists, including the Matt Munisteri Quartet, performing upbeat tunes from the Red Hot American Songbook on the banks of the Colorado River on September 8th, the famed vocal artists, The Manhattan Transfer, on September 11th, and another concert in the grotto on September 12th entitled Mozart and the Classical Style. A complete listing of MMF 2021 events is available here. Learn More about the 2021 Moab Music Festival here.