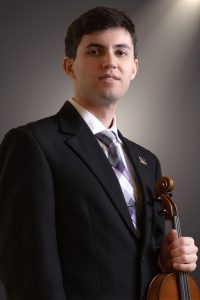 Violinist Paul Hauer joined the Milwaukee Symphony Orchestra in the fall of 2016. Solo concerts have brought Mr. Hauer to the countries of Germany, Greece, France, the Czech Republic, and the Philippines. Chamber music and orchestral concerts have brought him to Italy, San Marino, Singapore, Mexico, and China. Before moving to Milwaukee, Mr. Hauer was Principal Second Violin of the Evansville Philharmonic Orchestra and performed regularly with the Indianapolis Symphony Orchestra and the Louisville Orchestra.

Mr. Hauer traveled to Athens in May of 2015 to participate in the 4th Leonidas Kavakos International Masterclass. One month earlier, he performed the Sibelius Violin Concerto with the Springfield Symphony Orchestra. Other honors include winning the Indianapolis Matinée Musicale Collegiate Competition in 2013, which resulted in a performance at the Indiana Landmarks Center with pianist David Keep. In the summer of 2011, he toured Europe with the Denver Young Artists Orchestra as the soloist for the Barber Violin Concerto. While serving as teaching assistant to Addison Teng, he performed and taught lessons with the Teng Studio on their international tours.

His early violin training came from Gloria Schroeder and Ferenc Fenyő. Hauer also studied with Stéphane Tran Ngoc, Carol Leybourn, and Catherine Walby through the Lawrence Academy of Music. He has attended the Montecito International Music Festival, Oberlin in Italy, and International Academie de Courchevel. Hauer received his degrees from Oberlin Conservatory and Indiana University’s Jacobs School of Music. His principal teachers include David Bowlin, Alex Kerr, and Addison Teng. As a teacher, Mr. Hauer is on faculty at the Fulton Summer Music Academy and coaches strings at the Milwaukee Youth Symphony Orchestra and Maranatha Baptist University. As a founding member of the 414 Quartet, he performs with his MSO colleagues in venues across southeast Wisconsin. Mr. Hauer is a native of Fond du Lac, Wisconsin, and performs with the Peninsula Music Festival each summer. 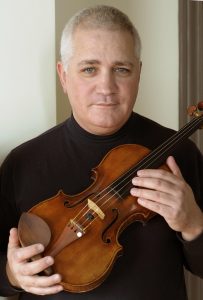 Violinist Stefan Hersh enjoys a varied career, equally at home as a chamber musician, soloist, orchestral musician and pedagogue. He currently serves as Artistic Director for Guarneri Hall NFP. Since 2003, Hersh has been Artist Faculty at the Chicago College of the Performing Arts at Roosevelt University. From 1995-2003, Hersh served as Associate Professor at DePaul University.

Stefan Hersh has been a featured soloist with the Minnesota Orchestra, the Vancouver Symphony, the Illinois Philharmonic and regional orchestras throughout the United States. He has been heard as a recitalist and chamber musician at the Cremona International Music Academy in Cremona, Italy, the Festival de Campos do Jordão in Brazil, Festicámara in Medellín, Colombia, the Colorado College Summer Festival, the Olympic Music Festival in Quilcene, Washington, the Moab Music Festival in Southern Utah, the Taos Summer Music Festival in New Mexico, the Tucson Winter Festival in Arizona and the Mendocino Music Festival in Northern California.

Hersh is also an expert appraiser in rare violins and bows. He is a partner at Darnton & Hersh Fine Violins in Chicago. 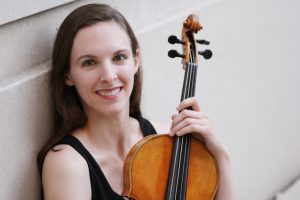 Amy Hess is a member of the viola sections of the Lyric Opera Orchestra and Grant Park Orchestra. She was formerly principal viola of the Civic Orchestra of Chicago and a member of the Northwest Indiana Symphony Orchestra, and she has performed with the Chicago Symphony, Chicago Philharmonic, and Music of the Baroque. Amy has recently performed the Stamitz Viola Concerto with Sinfonietta DuPage and collaborated in concert with bassist Edgar Meyer as part of the Aspen Salida concert series in Colorado. She also was part of the Chicago premiere of Joel Puckett’s string quartet concerto Short Stories with the Northwestern Symphonic Wind Ensemble, and performed the solo viola role in Richard Strauss’ Don Quixote with cellist Joseph Johnson and the Northwestern University Symphony Orchestra.

Amy received her Master of Music in viola from Northwestern University and is a Phi Beta Kappa alumna of Oberlin College and Conservatory of Music, where she earned degrees in French and violin. While at Oberlin, she spent a semester in Paris, studying violin with David Rivière of the CNSM and musicology at the Sorbonne. Her interest in French music continued with a collaboration with Ravel scholar Sigrun Heinzelmann on a presentation at the Music Theory Midwest Conference and several lectures at Oberlin. Amy’s principal teachers and mentors have included Karen Ritscher, Roland Vamos, David Bowlin, and Addison Teng, but it all began thanks to her mother, a Suzuki violin teacher in Lancaster, PA. 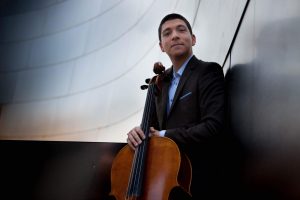 A native of Tucson, Arizona, cellist Nicholas Mariscal is the newly-appointed Assistant Principal Cellist of the Milwaukee Symphony Orchestra. A recent alumnus of the New World Symphony in Miami, Mr. Mariscal is a winner of the orchestra’s concerto competition, performing the rarely-heard Khachaturian Concerto-Rhapsody for cello. In 2018, he made his professional concerto debut performing the same work with the Tucson Symphony Orchestra. Additionally, he is a top prize winner in the Sphinx, Edith Knox, and Indiana University Latin American Music Center competitions.

Recently, Mr. Mariscal was invited to perform as Guest Principal Cello with the Trondheim Symphony Orchestra in Norway, on its tour of South Korea with conductor Han-Na Chang. He has also performed as Principal Cello of the Fjord Cadenza Festival in Ålesund, Norway, in addition to participating in the Tanglewood, Heifetz, and Aspen music festivals. An avid chamber musician, he has performed with esteemed artists such as Midori Goto, Jorja Fleezanis, Tamás Varga, Atar Arad, and Paul Kantor.

A passionate proponent of lesser-known and new music, Mr. Mariscal is an especially ardent performer of Latin American music. While still an undergraduate at Indiana University, he won the Latin American Music Center’s Recording Competition, giving him the opportunity to record and share rarely-heard music for unaccompanied cello by 20th and 21st century composers including Osvaldo Golijov, Alberto Ginastera, Paul Desenne, and Leo Brouwer. As a fellow at the New World Symphony, he took the same inspiration and curated a full orchestra and multimedia program titled Alma Latina, with the goal of sharing with audiences just a small sample of the trove of undeservedly neglected works from Latin America. As a performer of new music, he has been involved in dozens of premieres of new works, and has performed extensively as a member of the Aspen Contemporary Ensemble, the Indiana University New Music Ensemble, and USC’s Thornton EDGE ensemble. Following his Aspen performance of Tan Dun’s Elegy: Snow in June for cello and percussion ensemble, the Aspen Times wrote, “Mariscal seemed born to play Dun’s soulful, endlessly inventive and expressive music. With rock-solid technique and undeniable star quality, Mariscal seemed less a student getting a break than a bona fide artist.”

As a performer, Mr. Mariscal believes strongly in working to make classical music approachable and accessible to everyone, and strives to do so by speaking to audiences frequently, and attempting to break down traditional barriers in performances. Mariscal received his Bachelor of Music degree from Indiana University under the tutelage of Eric Kim, and received a Master of Music degree and a Graduate Certificate from the University of Southern California, where he studied with David Geringas and Ralph Kirshbaum. 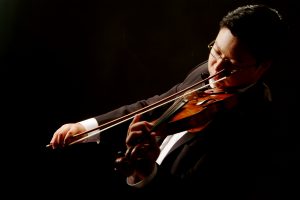 Violinist Addison Teng has given extensive solo and chamber music performances throughout Taiwan, Hong Kong, Italy, France, Philippines, and the United States. He has performed as soloist with the Oberlin College Orchestra, Eastman String Fellowship Orchestra, Sinfonia Academy Orchestra in the Philippines, the University of Macedonia Symphony Orchestra, and Symphony Irvine. Teng was chosen by the dean of the Oberlin Conservatory to appear on Italian television to promote Oberlin in Italy. He is the recipient of the 2018 Outstanding Young Alumni Award at Oberlin College and Conservatory, which recognizes young alumni who have distinguished themselves in their professional careers and their service to humanity. He has also been named a Distinguished Alumnus of the Meadowmount School of Music.

A rising pedagogue of his generation, Teng joined the violin and chamber music faculty of the Music Institute of Chicago in 2013, the faculty of the Montecito International Music Festival in 2014, the faculty of DePaul University School of Music in 2018, and the faculty of the Pacific Music Institute in 2020. He serves as director of the Fulton Summer Music Academy. Previously he served as teaching assistant at the Meadowmount School of Music and Northwestern University Bienen School of Music, assisting Sally Thomas, Amy Barlowe, and Roland and Almita Vamos. He has given masterclasses and coachings at the Taipei American School, Conservatório Villa-Lobos in Rio de Janeiro, Eastman Pre-College, and Lawrence University, as well as classes in Canada, the Philippines, Greece, and China. In the fall of 2016, Teng embarked on a tour to Cebu, Philippines with his students, where he gave masterclasses and concerts. A similar tour in the fall of 2018 took Teng and his students to Thessaloniki, Greece, and in fall 2019 they toured San Marino and Italy and were featured on San Marino national television.

Teng graduated with a Master of Music in Violin Performance and String Pedagogy from Northwestern University Bienen School of Music and received his Bachelor of Music in Violin Performance from Oberlin Conservatory of Music. His principal teachers and mentors include Sally Thomas, Ann Setzer, Roland and Almita Vamos, Peter Takács, Amy Barlowe, David Bowlin, and Karen Ritscher.

HELP US EDUCATE the next generation of musicians and music professionals by donating to the Fulton Summer Music Academy. Your gift will help to offset the cost of intensive daily one-on-one instruction for talented string students.