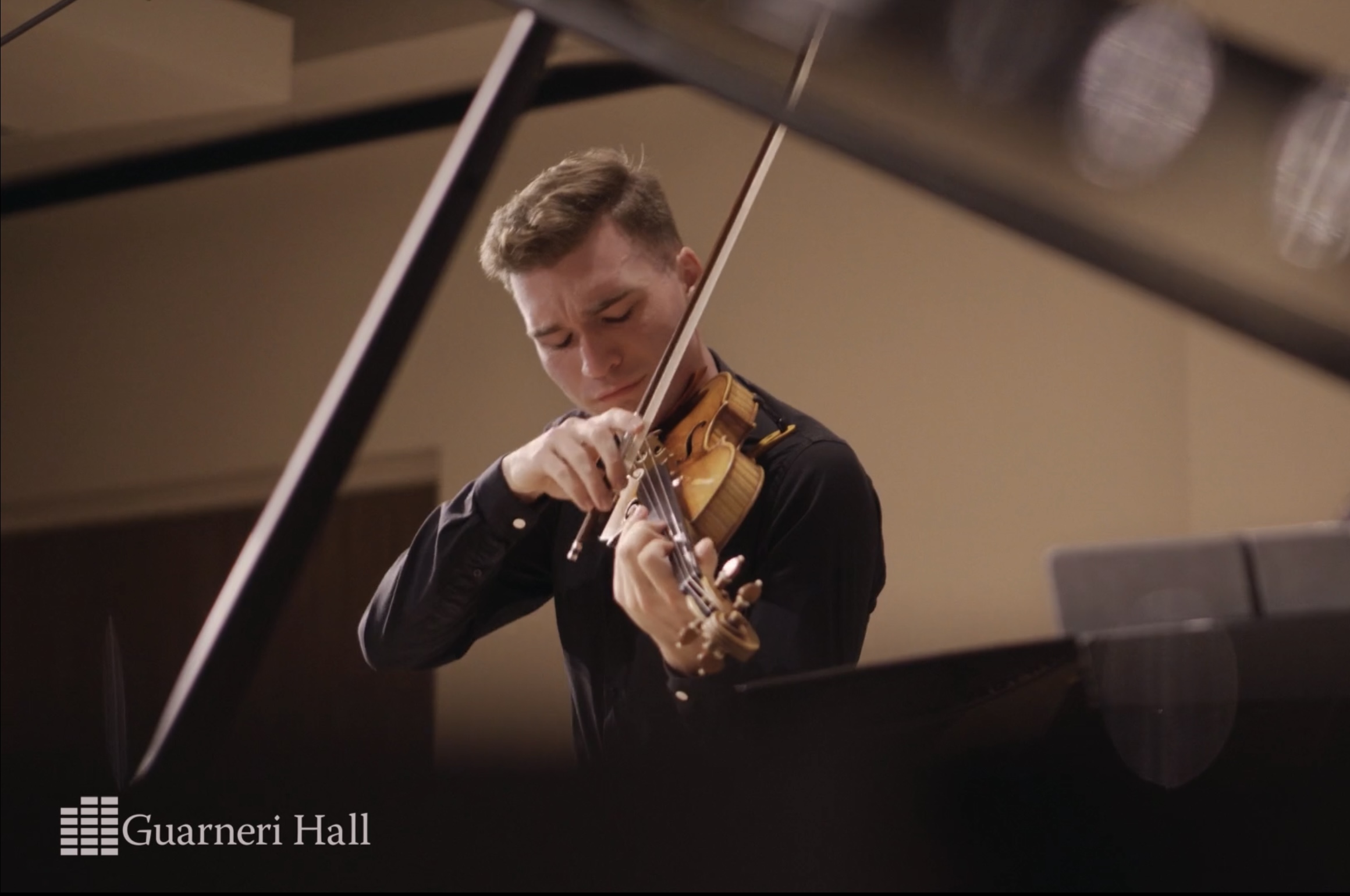 A new weekly broadcast is coming to the fast-evolving classical virtual music scene this fall. This Week from Guarneri Hall will launch as a livestreamed broadcast on the website of the Boston-based presenter host Groupmuse through a partnership with Guarneri Hall NFP. The program will be produced in Chicago with performances by some of the hottest rising classical stars today. The weekly shows will conclude with Zoom get-togethers with viewers and performers.

Groupmuse launched in Boston in 2013 as a way to help musicians perform for small audiences in informal settings, including private homes. The casual intimacy of Groupmuse events has set them apart from traditional concerts. With early success the organization has grown quickly, initially adding other east coast cities to their network before expanding westward. Seven years into their pioneering model, Groupmuse has built an impressive email list of 80,000 unique and loyal followers who attend over 1,000 concerts a year.

Groupmuse has also been an important proving ground for up and coming talent. Violinist Brian Hong, now Co-Artistic Director of NEXUS Chamber Music Chicago, played early Groupmuses while studying in Boston at the New England Conservatory. Hong says, “Ever since my first Groupmuse performance in a Boston living room back in 2014, I’ve always been inspired by the organization’s mission.” Hong is not alone. Groupmuse has been so popular with young performers on the East Coast that it is hard to find a serious up-and-coming musician who hasn’t played at least a few Groupmuse events.

Groupmuse Pivots in the Time of COVID-19

With in-person Groupmuses out of the question in the COVID-19 era, the organization has adapted. A nimble retooling has turned the website into a user-friendly portal for loyal Groupmusers all over the country to find dozens of virtual concerts a month. Groupmuse.com has been a vital lifeline between audiences and artists, providing musical connections for hundreds of virtual performances and post-concert zoom events at a time when public health concerns have curtailed in-person live music.

Groupmuse Virtual: An Experience unto Itself

Scott Garlinger, Groupmuse’s head of Partnerships and Event Production, says, “We designed virtual Groupmuses out of necessity, but they are not made as a replacement for in-person concerts. These virtual events give viewers and performers alike a new way to experience music in community.” Groupmuse’s Zoom sessions between viewers and performers draw people from around the world into close dialogue with the artists. The conversations can be personal in ways that are rare in traditional backstage post-concert parties. The Groupmuse virtual model for bringing performers and audiences together is appealing enough to suggest that there will be continued demand even after live concerts can resume.

Groupmuse continues to evolve and expand its platform with the launch of Center Stage. Center Stage highlights virtual presenters with the production capabilities for a truly “high def” viewer experience. The DIY nature of Groupmuse Community Events gives them an authentic and personal feeling. By contrast, the new Center Stage broadcasts require more resources and technical support than is practical for many Groupmusers. The two types of events are expected to complement one another on the Groupmuse platform and both are expected to thrive side by side.

Chicago-based live presenter and virtual music producer Guarneri Hall NFP is among the first organizations to sign on to broadcast on Groupmuse’s Center Stage. Since its founding in 2018, Guarneri Hall NFP has been producing classical music videos in a custom-built performance and recording space in downtown Chicago, and on location in and around the city of Chicago. The production team includes creative director and videographer Mike Grittani, award-winning recording engineer Christopher Willis, and executive producer Stefan Hersh, Guarneri Hall NFP’s founder and Artistic Director.

A New Format for Virtual Concerts

This Week from Guarneri Hall will be a weekly show airing six episodes each fall and spring, created exclusively for Groupmuse’s Center Stage. The program will feature chamber music and solo performances of some of today’s hottest rising artists, (many of them veteran Groupmusers), along with interviews and exclusives, all filmed in HD video and recorded to audiophile-quality specifications. Stefan Hersh said of the alliance, “Groupmuse has been a transformative force in creating the kinds of audience/artist connections that create new and lasting interest in classical music. Groupmuse is a perfect partner for Guarneri Hall NFP to work with to disseminate great material in this groundbreaking new format.”

This Week from Guarneri Hall will consist of six streamed broadcasts in the fall, each of which will include interactive Zoom events with the artists and Guarneri Hall producers. Broadcasts will air at 2 PM CST as a convenience to viewers in European time zones. A supplemental broadcast schedule to accommodate Far East time zones is being contemplated for spring broadcasts.

Happy Holidays! We are busy planning and producing great content for the New Year. Watch this space for winter and spring virtual events to be announced soon.