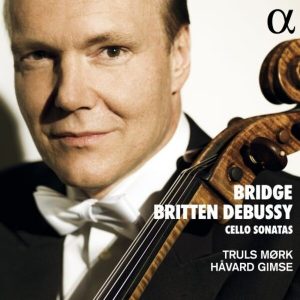 Norwegian cellist Truls Mork rose to prominence in the late 1980s in a career that blossomed into one of the most enviable of any cellist. Mork toured extensively through the 1990s and early 2000s, performing as a soloist in the world’s most glamorous concert halls, building a reputation as a virtuoso instrumentalist and a “musician’s cellist.”

Misfortune struck in April 2009, when Mork was sidelined by an infection of his central nervous system, attributed to a tick bite sustained while touring the US years earlier. Mork’s illness resulted in paralysis of his left shoulder muscles, raising doubts that he would ever be able to return to the stage. But Mork battled back heroically and was able to resume performing in January of 2011, after an 18-month hiatus.

His touring schedule has been somewhat restrained in the years since, and he has made relatively few recordings. Mork has been missed, which makes his upcoming release particularly welcome. The album includes sonatas of Bridge, Britten, Debussy, and Janacek’s Pohadka, all recorded with pianist Havard Gimse. We can all look forward to hearing new interpretations of these gems from one of the most eminent performers of our time. 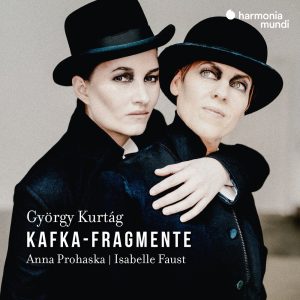 György Kurtág (1926 – ) is among the most revered composers of his generation. Kurtág’s compositional legacy draws upon the musical foundation of great Hungarian composers such as György Ligeti, Zoltan Kodály, and Bela Bartok. Kurtág’s Kafka Fragments (1986) is an hour-long, 40-song cycle in the manner of the great song cycles of Schubert and Schumann. Kafka Fragments explores an enormous expressive range, probing a modern prioritization of the journey over the destination. It is a fascinating and immersive collection of songs that fully exploits the voice and the violin, sometimes in unexpected ways.

Because Kurtág’s music makes no concessions to technical performance challenges, his works require highly capable and committed artists. Soprano Anna Prohaska and violinist Isabelle Faust make an ideal recording pair for the Kafka Fragments. Anna Prohaska studied at the Hanns Eisler Academy of Music and was engaged as a permanent ensemble member at the Berlin State Opera under Daniel Barenboim in 2006. She has worked closely with the Berliner Philharmoniker since 2007, maintaining a wide standard repertoire while specializing in modern and early music.

Violinist Isabelle Faust studied with Christoph Poppen and Dénes Zsigmondy and won the Paganini Competition in 1993. Important engagements soon followed: with the Berlin Philharmonic, the Orchestra of the Age of Enlightenment, the Boston Symphony Orchestra, and the NHK Symphony Orchestra, Tokyo, as Faust established herself as one of the most interesting performers of her generation. She has an unusually wide repertoire that extends from performing early music in period style to being a strong advocate for new music.

Prohaska and Faust’s shared consummate skill and wide artistic range bode well for a recording of the Kafka Fragments, one of the more challenging and rangy works in the repertoire. 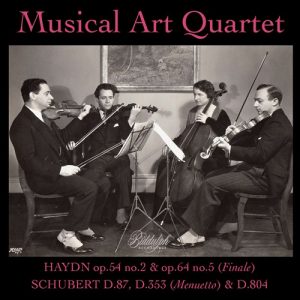 Violinist Sascha Jacobsen is best remembered as one of the four famous Russian violinists infamously identified in Gershwin’s comedic Mischa, Jascha, Toscha, Sascha from 1922, which lampooned Jacobsen along with Mischa Elman, Jascha Heifetz, and Toscha Seidel.

Jacobsen was a rising young soloist when he founded the Musical Art Quartet in 1926 with three classmates at the Institute of Musical Art in New York (later to become the Juilliard School). At the time, the divide between soloists and quartet players was even more pronounced than it is today and the formation of the quartet was an innovative and visionary project for its time. The quartet members shared a goal to promote the art of quartet-playing in an era when chamber music concerts were relatively rare events. The quartet lasted from 1926 to 1944 in various incarnations. They were true pioneers whose reading of Haydn’s String Quartet in C major, op. 54 no. 2 was the first-ever complete recording of a Haydn quartet.

Biddulph Recordings has developed a large catalog of sensitively re-mastered gems from bygone musical times. This re-release of the complete recordings of the Musical Art Quartet includes the Haydn op. 54 no. 2 as well as other quartet movements of Haydn and Schubert. It’s a must-listen for any historical recording lover. 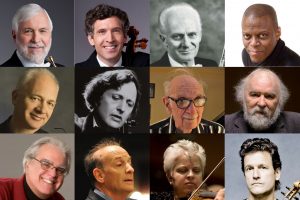