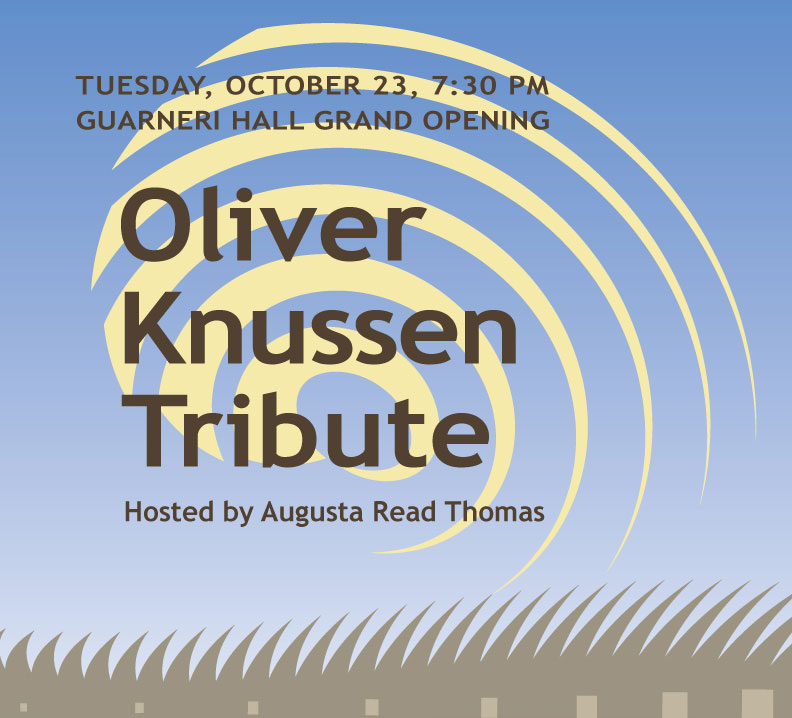 Read about the artists performing at the Oliver Knussen Tribute in Guarneri Hall on October 23, 2018. The event host is composer Augusta Read Thomas.

Rachel Blumenthal was appointed Principal Flute of the Sarasota Opera in 2017. Prior to her position in Sarasota, she held positions in the Des Moines and Battle Creek Symphony Orchestras. When not in Sarasota, she maintains an active freelance career in Chicago, where she has performed with the Chicago Symphony Orchestra, the Lyric Opera of Chicago, the Grant Park Orchestra, the Chicago Philharmonic, and other ensembles. Rachel has spent summers at the Tanglewood Music Center, the National Repertory Orchestra, the Aspen Music Festival, and the Brevard Music Center. She received her bachelor’s degree from the University of Michigan and her master’s degree from Carnegie Mellon University. Her primary teachers were Amy Porter and Jeanne Baxtresser.

Born in London, Roger Chase studied at the Royal College of Music with Bernard Shore and in Canada with Steven Staryk, also working for a short time with the legendary Lionel Tertis. He made his debut with the English Chamber Orchestra in 1979, and has since played as a soloist or chamber musician in major cities throughout the UK, USA, Canada, Australia, New Zealand, Japan, the Middle East, India, most of Eastern and all of Western Europe, Scandinavia and South Africa.

He was a member of many ensembles including the Nash Ensemble for more than 20 years, the London Sinfonietta, the Esterhazy Baryton Trio, the Quartet of London, Hausmusik of London, and the London Chamber Orchestra, and has been invited to play as principal viola with many major British orchestras and others in North America and Europe, including the Berlin Philharmonic Orchestra.

He has recorded for EMI, CRD, Hyperion, Cala, Virgin, Dutton, Centaur, Naxos and Floating Earth Records, demonstrating his diverse interests by playing with a folk group on an amplified viola, as a soloist on an authentic instrument and as an exponent of the avant-garde.

Venezuelan violinist Gabriela Lara began her music studies at the Conservatorio Vicente Emilio Sojo, in Barquisimeto, Venezuela. Ms. Lara was a member of the Latin American Violin Academy as a student of José Francisco del Castillo and Francisco Díaz and a member of “El Sistema” in Venezuela, where she served as a Concertmaster of the Lara Youth Orchestra and the National Youth Orchestra of Venezuela in 2017.

Michael Maganuco currently performs as principal harpist of Evanston Symphony, Dubuque Symphony, and Lakeview Orchestra. He has previously performed with Civic Orchestra of Chicago, New World Symphony, New England Philharmonic, and at summer music festivals including Tanglewood Music Center, Chautauqua Institute, and Eastern Music Festival. He is committed to the performance of contemporary music and has premiered works by composers Elliott Carter, Gunther Schuller, Theodore Antoniou, Peter Child, Malcolm Peyton, and many others. He has appeared as soloist in performances of Mozart’s Concerto for Flute and Harp, William Grant Still’s Ennanga, and Ravel’s Introduction and Allegro. As a Baroque triple harpist, Mr. Maganuco has played in historical performances of Handel’s Concerto for Harp and Monteverdi’s operas, L’orfeo and L’incoronazione di Poppea.

Mr. Maganuco is also a published composer and arranger. His original solo harp composition, Awakening Stillnesses, was awarded the grand prize in the Composition Contest for the 8th USA International Harp Competition. In 2012, his piece was recorded by French harpist, Agnès Clément, on her debut solo album, Dance. Mr. Maganuco has arranged extensively for the harp, as well; commissioned by Ann Hobson Pilot, principal harpist of the Boston Symphony Orchestra, he arranged a collection of Astor Piazzolla’s music for violin and harp, which Pilot recorded with BSO violinist, Lucia Lin, for an all-Piazzolla album, Escualo, released in 2015 by Harmonia Mundi. Mr. Maganuco graduated summa cum laude from Boston University with Bachelor’s degrees in harp performance and composition, and earned his Master’s degree in harp performance from Northwestern University.

Daniel Pesca, pianist and composer, is a passionate advocate for new music and a committed performer of the chamber music repertoire. Daniel has premiered over fifty solo and chamber works, many of which were composed for him. He has shared the stage with groups such as Imani Winds, Spektral Quartet, Chiara Quartet, Orchestra of the League of Composers, Ensemble Signal, Pittsburgh New Music Ensemble, Aspen Contemporary Ensemble, and Ensemble Dal Niente. He has recently performed at the Library of Congress, the Kennedy Center, Carnegie Hall, Columbia University’s Miller Theatre, and at numerous international festivals.

Daniel is Artist-in-Residence and Director of the Chamber Music Program at the University of Chicago, where he is the pianist of the Grossman Ensemble, the new resident ensemble at the Chicago Center for Contemporary Composition. He has also taught at Northeastern Illinois University, Syracuse University, and Ithaca College. He is co-director of the Zohn Collective, a new music ensemble that has recently completed projects in Guadalajara, Mexico and Oberlin, Ohio.

Daniel has a duo partnership with flutist Sarah Frisof (University of Maryland). They have performed over forty recitals at venues such as Interlochen, the Arts Club of Washington, and the Dame Myra Hess concerts in Chicago. Their recording of the music of Joseph Schwantner was released on Centaur Records, and their second CD is forthcoming. Daniel’s other CD recordings feature works by Ricardo Zohn-Muldoon and Carlos Sanchez-Gutierrez. New recordings of solo music by Augusta Read Thomas, Bernard Rands, and Matthew Schreibeis are slated for release in 2019.

Cellist Julian Hersh has appeared as soloist and chamber musician throughout the US, Europe, and the Far East, and is a frequent performer at various festivals, including the Olympic (WA), Saratoga (NY), and Caramoor music festivals. As a founding member of the Jupiter Trio he was awarded First Prize in the 2002 Osaka International Chamber Music Competition in Osaka, Japan. Chosen from 54 ensembles representing 19 countries the Jupiter Trio was the first American ensemble in the history of the competition to win the gold medal. In 2004, the trio was recipient of the Samuel Sanders Collaborative Artist Award from the Classical Recording Foundation for their recording of trios by Beethoven and Shostakovich on the Bridge Records label. Mr. Hersh was also a founding member of the Chicago-based Callisto Ensemble and can be heard with that ensemble on a CD featuring the music of Augusta Read Thomas. Included on the CD are many premiere recordings as well as a commissioned piece entitled “Prairie Sketches.”

Mr. Hersh has appeared with Yo-Yo Ma on international television in “Marsalis on Music” on CBS Sunday Morning, and has been featured in numerous radio broadcasts on NPR. He was also featured on Japanese television both in an interview and live performance at Izumi Hall in Osaka, Japan.

Mr. Hersh studied at the San Francisco Conservatory where his principal teachers were Bonnie Hampton and Irene Sharp. He is currently on the faculty of the DePaul School of Music and Roosevelt University.

Violinist Stefan Hersh enjoys a varied career, equally at home as a chamber musician, soloist, orchestral musician and pedagogue. He is artist faculty at the Chicago College of the Performing Arts at Roosevelt University, where he is the Director of String Chamber Music.

Hersh studied at the San Francisco Conservatory. He served as Associate Concertmaster with the Vancouver Symphony, Principal Second Violin with the Minnesota Orchestra and was a founding member of the Chicago String Quartet and the Callisto Ensemble. Hersh has traveled extensively, performing and teaching at music festivals throughout North and South America, Europe, and Asia.