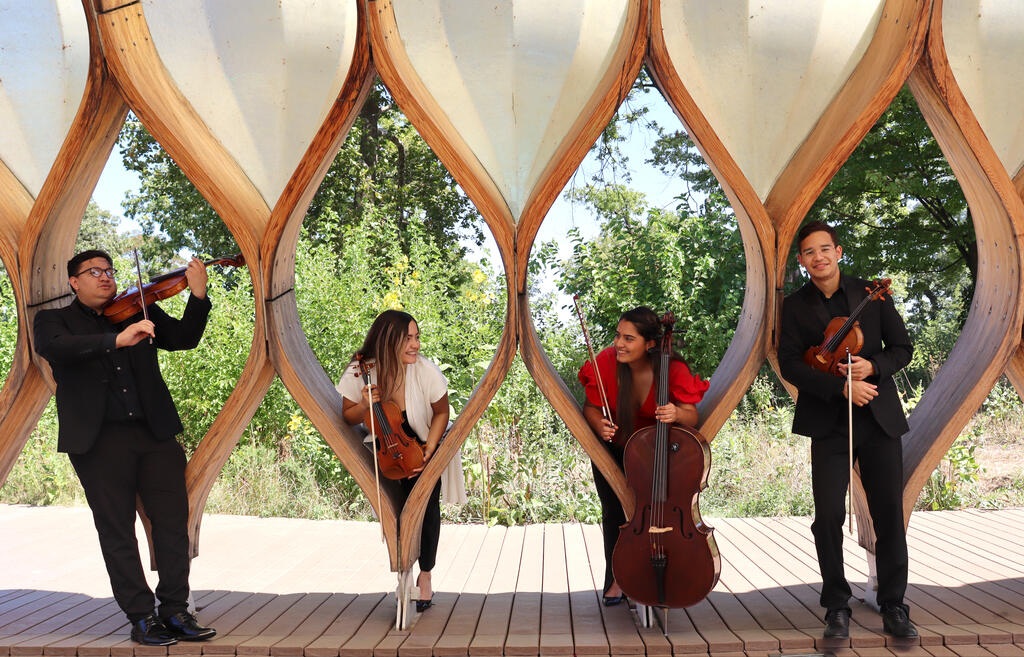 The Soto String Quartet takes its inspiration from famed Venezuelan artist Jesús Rafael Soto (1923-2005). Soto was a proponent of the kinetic art movement. He used a range of techniques to create a sense of movement in his work. The energy expressed in Soto’s art resonates with the members of the Soto quartet, who believe that the artist’s significant contribution to Venezuelan art deserves to be better known. The name Soto Quartet is intended to represent “Energy in Art,” in the name of this important Venezuelan artist.

The four Venezuelan musicians of the Soto Quartet were brought together by ‘El Sistema’ organization in Venezuela. The group advances a vibrant and joyful Venezuelan spirit and models music as a unifying life force between peoples of all nations.

Violinist Jesus Linarez began his musical studies in Venezuela, at the Music Conservatory Vicente Emilio Sojo. Linarez worked with Maestro Jose Francisco del Castillo for seven years at the Latin American Academy and was a member of the Venezuelan orchestra ‘El Sistema,’ serving as a principal with the 2017 National Youth Orchestra of Venezuela. Linarez participated in tours with three different Venezuelan orchestras: The National Youth Orchestra, the Teresa Carreno Youth Orchestra, and the Simon Bolivar Orchestra of Venezuela performing in important European cities including  Berlin, Munich, Barcelona, Toulouse, London, and prestigious symphony halls such as Berlin Philharmoniker and the “Palau de la Musica Catalana” in Barcelona.

Linarez has performed as a soloist with the Simon Bolivar Orchestra of Venezuela, the Lara Symphony Orchestra, and the Caracas Symphony Orchestra. He has also worked with world-renowned conductors, including Gustavo Dudamel and Sir Simon Rattle.

Ms. Lara has performed in masterclasses for Ilya Kaler, Ray Chen, Uto Ughi, and Midori. She won the 2019 Roosevelt University Concerto Competition and the 3rd International Violin Competition, in homage to Maestro Frank Preuss. Ms. Lara is currently part of the studio of Almita Vamos at the Chicago College of Performing Arts at Roosevelt University.

Violist Pedro Mendez, was born in Venezuela and began his musical studies with  the ‘El Sistema’ organization. He earned a degree in Violin Performance Arts in Vicente Emilio Sojo Conservatory and was part of Academia Latinoamericana de Violín, under the tutelage of Luis Miguel Gonzalez.

Cellist Lidanys Graterol discovered her passion for the cello at the age of eight, at the Ateneo de Coro in Falcón, Venezuela. She began her studies as a part of José Antonio Abreu’s System of Youth and Children’s Orchestras of Venezuela, known as ‘El Sistema.’ In 2017 Ms. Graterol won a national audition to join Venezuela’s National Youth Symphony Orchestra. She has performed with orchestras throughout Venezuela, including the prestigious Simon Bolivar orchestra.

Ms. Graterol has performed as a soloist with orchestras such as the Falcon Symphony Orchestra, the Falcon Regional Symphony Orchestra, and the Rafael Urdaneta Symphony Orchestra, in works of Tchaikovsky, Dvorak, and Lalo, among other composers. Ms. Graterol was the first prize winner in the  2020 Bellagrande International Music Competition and in the  2020 Chicago College of the Performing Arts Competition. She is a student of Tanya Carey at the Chicago College of Performing Arts at Roosevelt University. Lidanys Graterol is an affiliate artist with Guarneri Hall NFP and performs on a cello by Charles, J.B. Collin Mezin courtesy of Darnton & Hersh Fine Violins and Guarneri Hall NFP in Chicago.