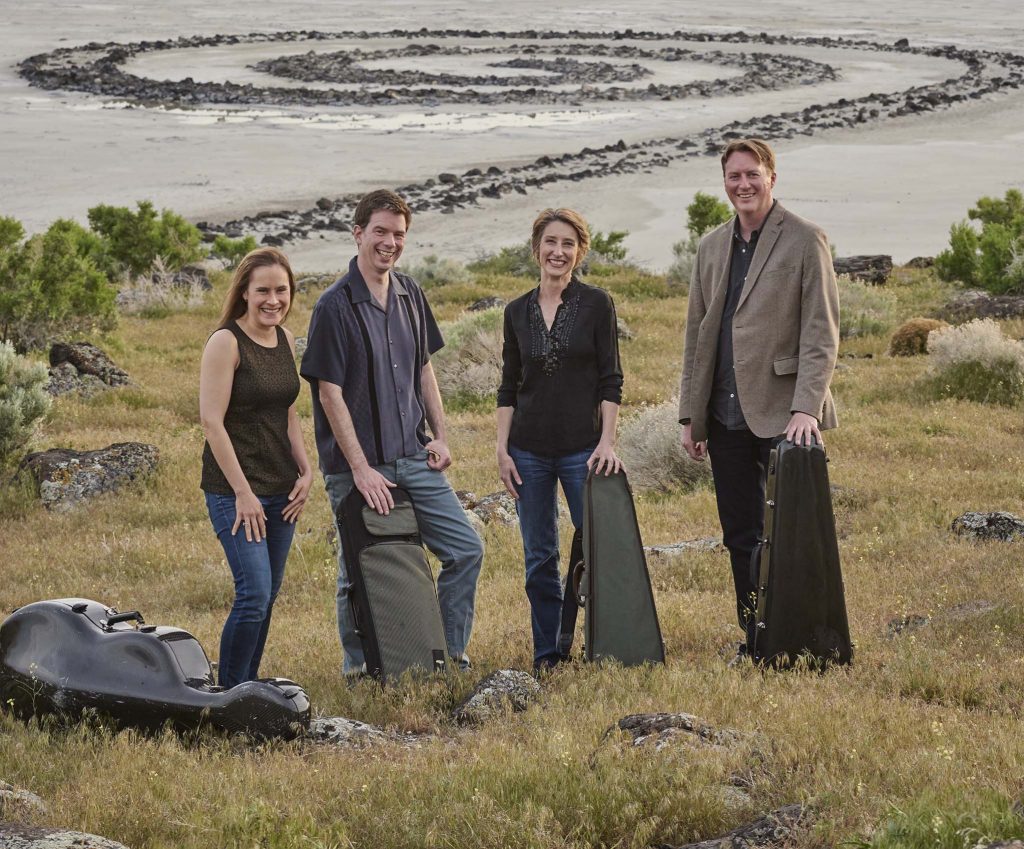 In the multi-media Crossroads project, a collaboration between Utah State University physicist Dr. Robert Davies and the Fry Street Quartet, Davies tells the audience that in 1992 a group of concerned scientists presented a paper endorsed by Nobel laureates that highlighted the eco-disasters ahead. According to their findings, without a drastic change of human behavior, the planet would eventually be “unable to sustain life in a manner that we know.” Fast forward three decades, innumerable such reports, and warnings upon warnings, scientists are still sounding alarms while eco-devastation continues unabated.

Connecting the Public to Important Issues

Davies’ frustration with the slow pace of change inspired him to collaborate with fine arts communities to communicate better with a broader spectrum of society. “It wasn’t Berkeley sociologists connecting us to the changes of the 1960s, it was 19-year-old musicians and filmmakers,” he explained in a Zoom interview alongside members of the quartet. “It’s typically the artistic and cultural institutions and practitioners who are the ones who figure out how to connect the public to important issues. It’s the same with climate change. There are lots of great scientists out there who are really good at telling the scientific story, but it’s taken us as far as it’s going to go.”

Davies has strong allies in the Fry ensemble. Many of the classical music world’s routines and rituals, such as flying for a single concert, are environmentally unfriendly, but as the pandemic subsides and concert life resumes the Fry hope more musicians will opt for an eco-friendly artistic life. Whenever possible, for example, the quartet insists on block bookings. They recently turned down an opportunity to present Crossroads at a lone event in the U.K., because “it’s antithetical to fly for one show, especially for that project,” said violinist Rebecca McFaul. The group might not have made the same decision a decade ago, she adds. The ensemble has “green” requests in its contracts, which they know presenters have read when there is a pitcher of water backstage instead of plastic water bottles.

Practicing What They Preach

For the past decade the Fry have been practicing what they preach, installing solar panels, buying electric cars, and touring with Crossroads to urge action. The two-part projectRising Tide (which features a string quartet by Laura Kaminsky, music by Haydn and Janacek, paintings by Rebecca Allan and environmental photographs by Garth Lenz) and Emergence (which has a Shakespeare-inspired soliloquy by Davies and a score by Libby Larsen). Both are included on the quartet’s album The Crossroads Project. There is also a film version of Rising Tide.

In Crossroads, Davies offers scientific explanations for the layperson, starting with the chemistry of water, which he discusses in front of a backdrop of striking photographs and paintings. The musicians narrate stories about natural disasters and the human suffering caused by our dependence on cobalt for smartphones and other electronics, for example. They also relay examples of activism by Indigenous groups against drilling in North Dakota. At one point the quartet plays Kaminsky’s eerie, volatile quartet while images of disappearing lakes and melting glaciers unfold behind them.

When the ensemble first presented Crossroads in 2012, said McFaul, they wanted to take an issue that had been politicized and present it in the neutral territory of the concert hall. The intention with Crossroads has never been to convince skeptics that climate change is real, but to focus instead on urging concrete action from those who believe in the science but don’t feel empowered to make change. The audience response to the project is invariably positive, according to the quartet. During one post-show discussion, a listener noted that the performance seemed to have a spiritual and almost religious component and asked if that was intentional. “There is a little bit of evangelism in what we do,” acknowledged violinist Robert Waters. “We believe really, really, strongly and we’re trying really hard to get other people to believe strongly too.”

A Quest for a More Sustainable Cultural Lifestyle

The Fry, which also includes violist Bradley Ottesen and cellist Anne Francis Bayless, is quartet-in-residence at Utah State University’s Caine College of the Arts, where they are also faculty members. The group is certainly not alone in its quest for a more sustainable cultural lifestyle. One of their close collaborators includes climate activist Gabriela Lena Frank, currently composer-in-residence at Utah State, where the ensemble will perform a new piece it commissioned from her. Davies teaches a course in sustainability for musicians at Frank’s Creative Academy of Music.

McFaul and Frank have co-authored  articles for Chamber Music magazine, including Our Crises Are Connected: COVID-19’s Lessons for the Growing Climate Emergency and Composing a Musicians’ Climate Citizenry, in which they offer tips for fellow musicians aiming to create a more environmentally friendly profession.

The Fry’s program on April 5 at Guarneri Hall includes a new piece by Clarice Assad and the String Quartet No. 2 by Benjamin Britten, an activist and pacifist known for his love of nature. The group has also commissioned a piece by Nicolas Lell Benavides for string quartet and electronics, inspired by Benavides’s research into environmental issues in Utah. Arts students studying with Davies and the Fry quartet in Utah are encouraged to create ambitious projects that explore science and sustainability.

As the climate catastrophe worsens each year, the ending of Crossroads is updated. Earlier incarnations of the project concluded with information about environmental organizations to contact, but that approach was eventually discarded because the ensemble felt that the laundry list broke the spell of the artistic presentation. Instead, explained Davies, since the scope of destruction can be overwhelming and people often feel that they can’t really make a difference as individuals, “we decided to give the audience a mindset to move forward and be in a place where they’re activated, not deactivated.”

In a section of Crossroads called “Re-imagine,” Davies says: “We ask you to imagine a world whose ecosystems are thriving and whose biosphere is replenishing and whose bounties are shared by everyone.” He advises listeners to “pick something, make it yours and talk about it. Comfort zones are made to be stretched and folks, it’s time to stretch.” The film finishes with an excerpt both jubilant and pensive from Janacek’s String Quartet No. 1. The concluding message from Davies is one of community: “You’re not alone and you need not do everything. But each of us must do something.”

Vivien Schweitzer is a writer and pianist based in New York. She worked for ten years as a classical music and opera critic for the New York Times. She has also written for the BBC, the Moscow Times, and The Economist. https://www.vivienschweitzer.com/
View Calendar