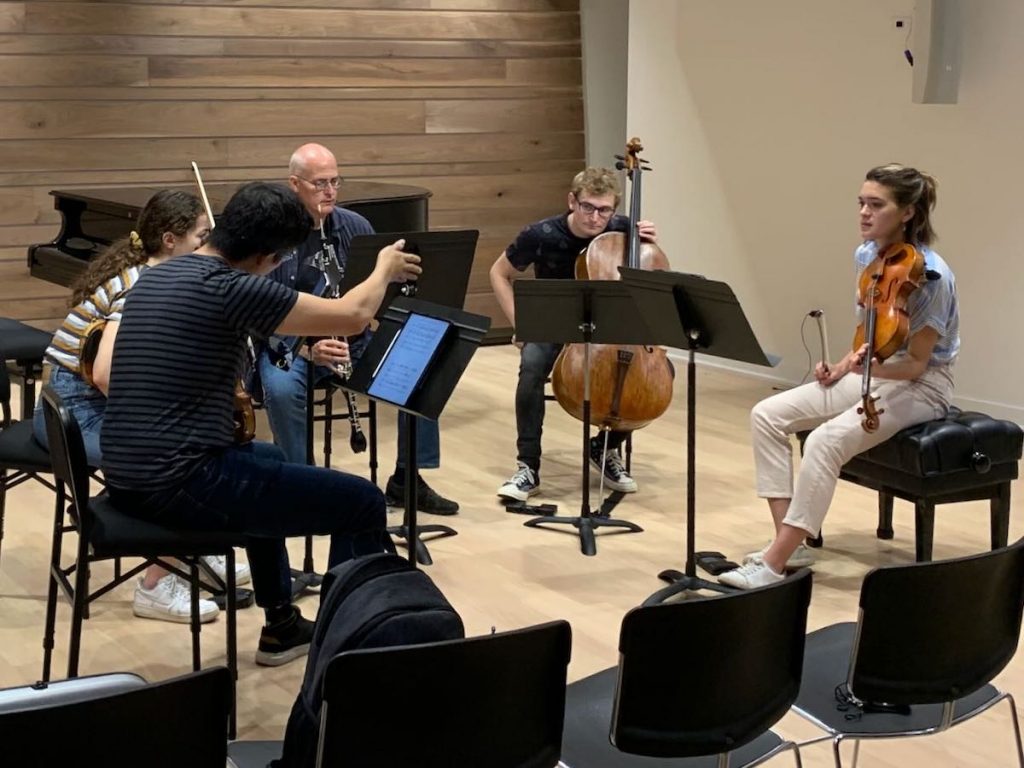 What Happens in a Chamber Music Rehearsal

On August 27 and September 1, NEXUS Chamber Music will offer a rare opportunity to the music-curious by inviting an audience into two rehearsals during their annual Chamber Music Festival. A limited number of observers will get to witness a process that is normally hidden from view. Pulling away the curtain will reveal a set of interactions between the musicians that might seem mysterious or impenetrable to the outsider. Understanding what happens in rehearsal can reveal intriguing details that will enhance not only one’s appreciation of the preparation process but also the live performance that follows.

A professional chamber music rehearsal always begins with individual preparation. Before coming together in an ensemble, it’s expected that each player will be familiar with the score and will have the notes and rhythms of their own part worked out. The amount of individual preparation required will vary depending on the piece and the musician’s skill set and experience. Preparation times vary by individual, but time spent isn’t the point: professional chamber musicians demonstrate preparation, not by hours invested but by the high-quality output that results, whatever the cost.

Ideally, each player will also have begun to formulate a composite concept for how the piece can sound before rehearsals begin.  However, all individual ideas must remain fluid in the process of establishing a collective interpretation between all of the collaborating musicians.

Formally, there is no technical leader of a chamber music rehearsal. Chamber music is a democratic process requiring mutual respect among the players. The collaborative process can produce friction, and the most successful groups treat one another with consideration and find reasonable resolutions for whatever tensions arise. But the interpersonal challenges of collaboration at this level are sometimes daunting. In addition to being experts at their instruments and keen interpreters of music, professional chamber musicians also must be diplomats in how they offer criticism and generously non-defensive in how they receive it. Being “user-friendly” is a matter of viability in the professional chamber music world: sour apples receive far fewer opportunities to perform. Tact, diplomacy, curiosity, and open-mindedness are the norm at high-level chamber music rehearsals.

The most crucial aspect of preparing a chamber music performance is agreement on how to handle the markings from the composer. These markings can’t be taken literally; players must interpret the composer’s indications based on their knowledge of music, the conventions of the composer, and their era. Interpretation is subjective, and any group must navigate through potential conflict over its players’ choices. Reaching consensus is no small feat, considering the profoundly personal nature of music interpretation, differences in players’ training, and often the amount of personal ego that comes with mastery of an instrument. A skilled group working together toward consensus over an upcoming performance can expose interesting and nuanced interpretive differences.

Despite the interpretive directive, any group must first address technical problems. Solving them can dominate the rehearsal process and obscure the interpretive path in the early stages of learning a piece. The imperative to solve the technical issues might require slowing sections of the music down in order to coordinate fast-moving notes, organize bow direction, tune intervals, and modify balances. This can make rehearsals seem dry or tedious to observers, but there is no alternative path to viability. Audiences take technical success for granted but are intolerant of problems in ensemble, intonation or rhythm.  Therefore addressing technical issues is an absolute priority in rehearsal, even if it is not the ultimate goal.

First, we have to line everything up. Then we can start to make musical gestures.

The body of repertoire that string and piano chamber musicians learn and play as staples includes all of the mixed chamber music of Brahms, Beethoven, Mozart, Mendelssohn, Schumann, and more. The broad familiarity and experience with this repertoire facilitate quick preparation for experienced musicians: the challenges of each piece are well-known, and the languages of each composer are well-understood. A standard piano quintet will typically be at a high professional level after the first reading and stage-ready after only one or two rehearsals. The bulk of the work will come down to minor issues like the amount of slowing down in one spot and checking the balance in another. This shorthand preparation can astonish avocational musicians accustomed to a much slower preparation process.

With new works, simply lining up all the notes can be time-consuming. Even a very well-prepared group might not be able to play all the way through a challenging new piece until a few rehearsals into the preparation process. New-music specialists are a special breed. They have the tenacity and commitment to spend as much time as needed to work through the problems, and the willingness to undertake tedious challenges repeatedly in pursuit of a noble mission to bring new music forward.

The playing can always be improved, and it is our job to never stop trying to make the performance as good as it can be.

Regardless of how quickly a piece comes together in rehearsal, a group might follow up with slow work in certain parts to bring the basics of intonation and the matching of sounds to a generally higher level. But while audiences might marvel at the perceived “perfection” of a performance, there is no such arrival point for working chamber musicians. NEXUS Co-artistic Director Alexander Hersh said “The playing can always be improved, and it is our job to never stop trying to make the performance as good as it can be.” At the Marlboro Festival in Vermont, groups play a piece at a high level at the first rehearsal before proceeding to work on it for six weeks or more, burnishing that performance to the exclusion of all other activities. While this level of commitment might feel extreme, professional string quartets will go even further, sometimes rehearsing 20 hours each week or more on a small group of pieces for a whole season.

Reinforcement improves the success rate, so repetition is sometimes part of the rehearsal protocol. The differences between multiple readings and the comments among artists between repetitions will sometimes expose interesting interpretive nuances. Live music is a living, breathing thing. No two renditions of a piece can be identical, and listening for the differences in two readings can hone one’s ability to revel in a particularly successful gesture or interpretive decision.

The lives of professional musicians are devoted to a daily routine of individual practice and collaborative rehearsal. Rehearsals reveal musicians’ personalities in unique ways that go beyond their publicly available sounds, publicity photos, bios, online clips and stage personas. Watching them rehearse can foster connections that wouldn’t be possible in a concert setting.