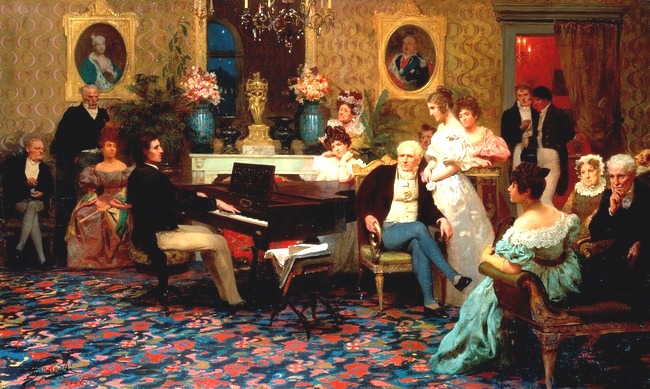 An Evening of Chopin Program Notes

Frédéric Chopin was born in 1810 in Żelazowa Wola, a suburb of Warsaw. Six months after his birth, Chopin’s father, Nicholas, took a job teaching French at the Warsaw Lyceum in the Saxon Palace, and the family relocated to Warsaw. Chopin’s mother played and taught piano and probably gave Chopin his initial instruction on the instrument. In 1816 Chopin began his first formal lessons with the Czech pianist Wojciech Żywny. He made rapid progress and, at the age of 7, began performing in public and composed two polonaises.

Young Chopin’s reputation spread, and he soon became a popular figure in important circles. He played the piano for the ruler of Russian Poland, Grand Duke Konstantin Pavlovich, and was a playmate of the Duke’s son. He was invited to perform when Tsar Alexander I visited Warsaw in 1825, and the Tsar presented Chopin with a diamond ring.

In 1826 Chopin enrolled at the Warsaw Conservatory, where he studied music theory and composition with the Silesian composer Józef Elsner. Chopin became friendly with members of Warsaw’s young artistic and intellectual world, including Julian Fontana, Józef Bohdan Zaleski, and Stefan Witwicki. Throughout his student days, Chopin was active as a performer and composer. In 1829, while still enrolled at the Warsaw Conservatory, Chopin was a guest in Berlin of Prince Antoni Radziwiłł, governor of the Grand Duchy of Posen, and an aspiring cellist. Chopin’s Introduction and Polonaise Brilliante in C major for cello and piano, Op. 3 was written for the prince and his daughter Wanda, a pianist.

Later in 1829, Chopin heard Nicolo Paganini perform in Warsaw and composed his variations, Souvenir de Paganini. Chopin graduated from the Warsaw Conservatory in the same year and was noted as “Chopin F., third-year student, exceptional talent, musical genius.”  After graduation, Chopin made his debut in Vienna with two highly successful concerts before returning to Warsaw. Chopin premiered his Piano Concerto No. 2 in F minor, Op. 21, in Warsaw in 1830. That November, Chopin set out on a tour to Austria. While in Vienna the Polish November uprising broke out, and the repression that followed made a return to Warsaw difficult. Chopin settled in Paris instead. He was never able to return to Poland but strongly identified as a Pole and maintained close relationships with other Polish ex-pats in exile. Chopin’s music and persona became an emblem of Polish nationalism.

A Pole in Paris

Chopin lived in Paris for the last 18 years of his life. He suffered from ill health throughout his adulthood, prone to frequent respiratory tract infections. Chopin was in demand as a teacher, and his published compositions were favorably reviewed and sold well, providing substantial income for Chopin. He traveled in aristocratic and intellectual circles in Paris, playing in the salons of the wealthy but rarely performing in public. But the musical establishment held Chopin in the highest esteem. His admirers included Felix Mendelssohn, Franz Liszt, and Robert Schumann, who dedicated his Kreisleriana, Op. 16 to Chopin.

Chopin’s Paris debut at the Salle Pleyel in 1832 was attended by Liszt, who remarked: “The most vigorous applause seemed not to suffice to our enthusiasm in the presence of this talented musician, who revealed a new phase of poetic sentiment combined with such happy innovation in the form of his art.” The two pianists maintained lifelong admiration for one another and became occasional musical collaborators. Still, their relationship could sometimes be strained: where Liszt was a theatrical extrovert as a performer, Chopin was shy and delicate, and these differences created tension at times. But both Liszt and Chopin were profoundly influential Romantic archetypes who forever changed public perceptions of what piano music could be.

Chopin’s engagement with Maria Wodzińska from 1836 to 1837 was eventually broken off. His subsequent 10-year relationship with the author Aurore Dupin (aka George Sand) was turbulent. Jane Stirling, an ardent admirer, supported Chopin financially in his final years. Chopin died in Paris in 1849 at the age of 39, probably of pericarditis aggravated by tuberculosis.

Chopin was among the biggest musical celebrities of the Romantic era. He was a fervent nationalist expatriate who led an unorthodox and publicly visible romantic life. He died in Paris in 1849 at the young age of 39, probably of pericarditis aggravated by tuberculosis.

Chopin is remembered for his sensitively expressive and intelligent piano playing and his deeply inspired compositions, most of which are for the solo piano, virtually all of which form part of the core of the repertoire for the instrument.

The waltz Op. 69 No.1 was written as a farewell piece to Chopin’s fiancé Maria Wodzińska. The original autograph copy from September 1835, with the dedication “Pour Mlle Marie,” was lost.

Chopin began to sketch out his Ballade No. 1 during his stay in Vienna in 1831, before his move to Paris. He completed the work in Paris in 1835 and dedicated it to Baron Nathaniel von Stockhausen, the Hanoverian ambassador to France. In 1836, Robert Schumann wrote of Ballade No. 1: “It seems to me to be the work closest to his genius (though not the most brilliant). I even told him that it is my favorite of all of his works. After a long, reflective pause, he told me emphatically: ‘I am glad because I too like it the best, it is my dearest work.'”

Chopin started to work on his Ballade No. 2 in 1836. The piece was finished in Mallorca in December 1838, where Chopin was vacationing with Aurore Dupin. Robert Schumann, who had dedicated his Kreisleriana, Op. 16, to Chopin, received the dedication of this ballade.

The Ballade No. 3 was probably written in the summer of 1841 in Nohant, France, and dedicated to Chopin’s pupil Pauline de Noailles (1823–1844). Breitkopf & Härtel published the first German edition in January 1842.

The Ballade No. 4 in F minor, Op. 52 is among Chopin’s most highly regarded works and is considered a masterpiece of Romantic piano music. Of the four Chopin Ballades, it is generally considered the most technically and musically challenging and is also the longest. Chopin seems to have begun work on Ballade No. 4 just after finishing Ballade No. 3, completing it in December 1842. Ballade No. 4 was dedicated to Baroness Rothschild, wife of Nathaniel de Rothschild, who had introduced Chopin to aristocrats at her Paris residence.

The two nocturnes, Opus 62, were composed between 1845 and 1846 and published in 1846. The Opus 62 nocturnes were the last that Chopin wrote. Initially, these refined and intimate pieces were misunderstood and underappreciated. Not until the 20th century would this pair of works come to be regarded highly among Chopin’s output, and they are frequently heard in recitals today.

By 1833 Chopin, at just 23 years old, had cemented his reputation in Paris as a pianist and a highly regarded composer.  The Opus 10 etudes published that year included material written in the years just before. The etudes 9, 10, and 11 date from October/November 1829, and no. 12 was written in September 1831. Chopin dedicated Opus 10 to Franz Liszt – “à mon ami Franz Liszt” (to my friend, Franz Liszt).