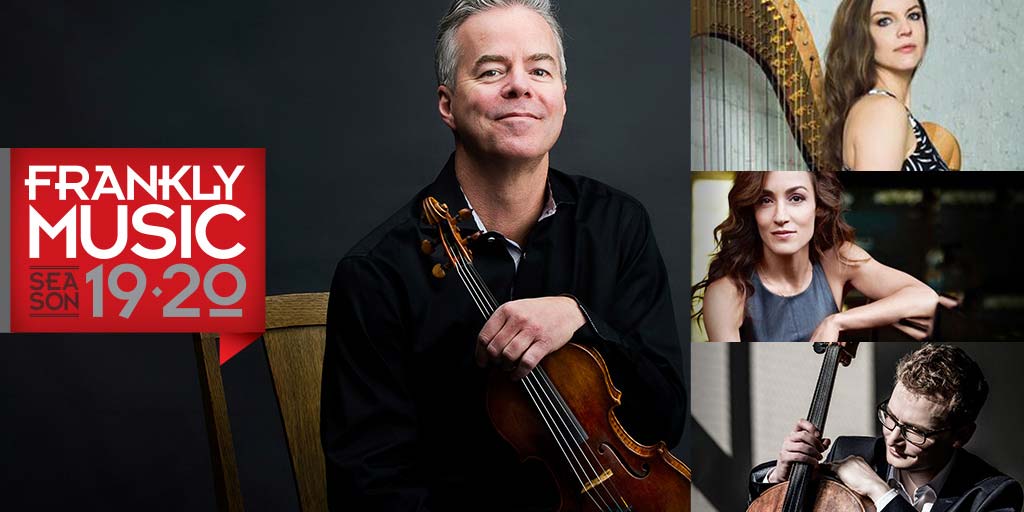 Frank regularly performs as a soloist with the Milwaukee Symphony Orchestra and as soloist and chamber musician throughout the US and Europe. He is the founder of his own chamber music series in Milwaukee, Frankly Music, now in its 16th season and consistently recognized for innovative programming and its ability to attract leading performers from around the world.

At 17, he was one of the youngest prizewinners in the history of the Nicólo Paganini Competition in Genoa, Italy, and five years later was one of two American prizewinners at the Eighth International Tchaikovsky Competition in Moscow, which was documented in an award-winning PBS film. His extensive recording discography includes a wide range of repertoire on various labels that have garnered multiple Grammy nominations.

His most recent series of recordings, A Violin’s Life, chronicles the extraordinary history and lineage of his current violin, the 1715 Lipiński Stradivarius. This instrument has direct ties to Giuseppe Tartini, Edvard Grieg, Johannes Brahms, and Robert and Clara Schumann.

On January 27, 2014, the Lipiński Stradivarius was stolen from Mr. Almond in an armed robbery after a concert. The violin was recovered nine days later, and the story made headlines around the world, most notably in an extensive Vanity Fair feature. The robbery and recovery are the subject of a new documentary film, Plucked, which premiered at the Tribeca Film Festival in April 2019. He was also featured on The Moth Radio Hour, the critically acclaimed storytelling program and podcast heard by millions on Public Radio International stations nationwide.

Community outreach and giving back to the Milwaukee community are also at the heart of Frank Almond’s artistic priorities. He mentors young musicians of all performing levels and backgrounds, and performs in nontraditional venues where classical music has a rare and unusual presence.

Frank holds two degrees from the Juilliard School, where he studied with Dorothy DeLay. Other important mentors and teachers were Michael Tseitlin, Felix Galimir, and Joseph Silverstein. He currently serves on the Faculty at Roosevelt University in Chicago and is the Artist-in-Residence at the Milwaukee Youth Symphony, one of the largest youth arts programs in the United States. Previous teaching positions include positions at Northwestern University and Texas Christian University. Read more about Frank Almond

Multi Grammy-nominated artist Marta Aznavoorian has performed to critical acclaim throughout the world as orchestral soloist, recitalist, chamber musician and educator. A Chicago native, she has performed in her hometown's most prestigious venues and tours extensively throughout the world. She made her professional debut at the age of 13 performing Mozart Piano Concerto No 24 in C minor K.491 with the Chicago Symphony Orchestra at Symphony Center in four concerts of their series. She has won over audiences appearing as soloist with orchestras internationally including the Sydney Symphony Orchestra, the Sydney Conservatory Orchestra, San Angelo Syphony, San Diego Symphony, and the New World Symphony which resulted from a personal invitation from Michael Tilson Thomas who also was her conductor.

Aznavoorian has worked with such renowned conductors such as the Late Sir George Solti, Michael Tilson Thomas, Lukas Foss, Henry Mazer, Francesco Milioto, Kirk Muspratt among others. She has won numerous awards, including first prize at the Stravinsky in the Stravinsky International Competition where she was also lauded the special prize for best interpretation for the commissioned contemporary work. As a recipient of the 1990 Level 1 award in the National Foundation for the Arts Recognition and Talent search, Ms. Aznavoorian became a Presidential Scholar and was invited to the White House where she met former President George W. Bush and performed as soloist at the Kennedy Center in Washington, D.C.

Ms. Aznavoorian is founding member of the Lincoln Trio, which Fanfare Magazine has labeled as "one of the hottest young trios in the business." The Grammy-nominated trio tours regularly throughout the world and just celebrated their most resent CD release from Cedille Records, Trios from our Homelands, which was nominated for a Grammy in the best small ensemble/chamber music performance category in 2017.

In strong demand as a chamber musician, Ms. Aznavoorian has worked with many artists all over the world and has frequented many festivals including Tanglewood Festival, Aspen Music Festival, Caramoor Festival, Hornby Island, Green Lake Festival, and the Ravinia Festival.

A student of the renowned teacher Menahem Pressler, Aznavoorian received her Bachelor degree and Artist Diploma at Indiana University and her Masters Degree from New England Conservatory where she studied with the late Patricia Zander. A passionate teacher and educator, Aznavoorian has taught and given masterclasses at Universities throughout the United States and abroad, and is on faculty at the Music Institute of Chicago, and Piano and Chamber Music faculty at DePaul University School of Music.

Aznavoorian records for Naxos, ARTEC label, Cedille Records and recently released Violin and Piano arrangements of the Music of Charlie Chaplin under the Warner Classics and Erato label. She is a Steinway Artist.

The Musiq3 critics of the RTBF Belgian Radio company gave Hersh's performance at the inaugural Queen Elisabeth Cello Competition in Belgium in 2017 a rave review: "With his scenic presence and charm, Hersh has everything to become the darling of the public."

Hersh is co-artistic director of NEXUS Chamber Music, a collective of international artists committed to stimulating interest in serious chamber music. NEXUS presents a two week chamber music festival in Chicago each August, featuring new and obscure works alongside standard works of the chamber music canon. NEXUS plays to unusual and intimate venues with the mission of breaking down the barriers that often separate performers from audience members.

A fourth=generation string player, Alexander’s parents, Stefan Hersh and Roberta Freier, are both active professional violinists. His grandfather, Paul Hersh, is professor of viola and piano at San Francisco Conservatory of Music, and his great grandfather, Ralph Hersh, was a member of the WQXR and Stuyvesant String Quartets, and principal violist of the Dallas and Atlanta Symphony Orchestras.

Raised in Chicago, Alexander Hersh began playing the cello at the age of 5. He studied with Steve Balderston and Hans Jørgen Jensen, and attended the Academy at the Music Institute of Chicago. Hersh received his B.M. from New England Conservatory (with academic honors) where he was a student of Laurence Lesser and recipient of the Clara M. Friedlaender Scholarship. In May of 2017, he received his M.M. from New England Conservatory where he studied under the tutelage of Paul Katz and Kim Kashkashian. Hersh was a recipient of the Frank Huntington Beebe fund for studies in Berlin during the 2017-2018 academic year where he studied with Nicolas Altstaedt at the Hanns Eisler Hochschule for Musik Berlin. He plays a G.B. Rogeri cello on generous loan from a sponsor through Darnton & Hersh Fine Violins in Chicago.

Praised for her "incandescent harp playing…and an enormous palate of sonic colors," harpist Kelsey Molinari is one of the most sought after harpists of her generation. She has performed throughout the world with some of the top orchestras in the country, most recently performing as guest principal harpist with the Milwaukee Symphony.

From 2005-2008, Kelsey was a member of the UBS Verbier Festival Orchestra in Switzerland, touring the world and performing with prominent conductors and soloists. Kelsey has also participated in the Spoleto Festival in Charleston, SC and the Eastern Music Festival in Greensboro, NC.

During the 2008-2009 season, Kelsey performed as acting substitute principal harpist for the Chicago Symphony Orchestra. During her appointment, she toured with the orchestra to Carnegie Hall and worked with maestros Pierre Boulez, Bernard Haitink, Charles Dutoit, Esa Peka Salonen, Michael Tilson Thomas, James Conlon, Fabio Luisi, Christoph Eschenbach, and others. She can be heard on the Chicago Symphony’s Grammy nominated CD featuring Stravinsky’s "Symphony in Three Movements."

In 2011 Kelsey joined the Los Angeles Philharmonic and Maestro Gustavo Dudamel for their European tour which included performances in Lisbon, Madrid, London, Paris, Cologne, Budapest, and Vienna. In January and February 2012, Kelsey was invited by Gustavo Dudamel to return to the LA Phil as guest principal harpist in its Mahler Project, a complete survey of the symphonies of Gustav Mahler performed by the LA Phil and the Simon Bolivar Orchestra in both Los Angeles and Caracas, Venezuela. The Mahler Project culminated in a performance of Mahler's 8th Symphony, the "Symphony of a Thousand." In Caracas, Venezuela more than 1,400 musicians were involved. Kelsey can be heard on the Philharmonic’s Deutsche Grammophone recordings of Mahler 8 and 9.

Kelsey completed her bachelors and masters of music at the Chicago College of Performing Arts of Roosevelt University with Sarah Bullen, principal harpist of the Chicago Symphony Orchestra. Raised in Thiensville, Wisconsin, Kelsey and her husband live in Milwaukee with their three children.