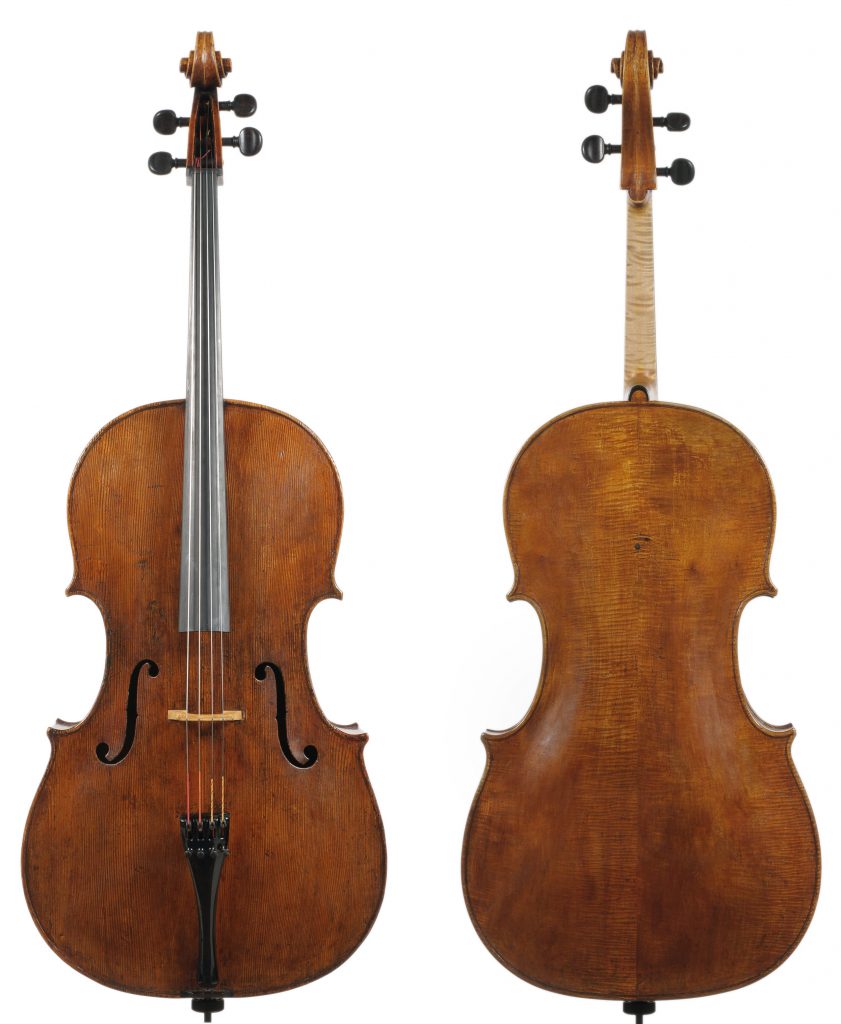 The magnificent cello shown here was made by David Tecchler in 1701. It bears an authentic manuscript label and is striking both for its impeccable condition and beautiful orange-brown varnish and for its first-rate materials and workmanship. Originally of grand proportions, it has been slightly reduced in size, but this has not diminished its powerful appearance.

The late 17th century saw the role of the cello evolving from a supporting bass role to that of a solo instrument. This shift drove the creation of a new string technology that made a shorter string length for the lower strings viable and saw luthiers across Italy increasingly making smaller model cellos. With a shorter back length (less than 30 inches) and an overall more manageable size, the resultant ease of playing facilitated navigation of the ever-more florid “basso continuo” parts being written for the cello.

Tecchler, however, continued producing mostly larger cellos well into the 18th century, with most examples subsequently being cut down to facilitate their use in emerging repertoire. It is worth noting that in 1701, when Tecchler made this cello, Antonio Stradivari crafted the “Servais” cello, the last extant cello made in Cremona with a back length over 30 inches long.

Tecchler’s continued production of large size cellos is probably the result of commissions directly from the papacy, or at least for use in a church service where the cello continued to function primarily as a bass instrument. This might also explain the plugged hole above the center of the back on this cello and many other Tecchler cellos. The hole allowed for the cello to be hung by a strap around the player’s neck for performance in a church processional.

Another factor related to the size of Tecchler cellos was the tuning of the “A” in the baroque era, which varied throughout Europe with the Roman tuning being on the low side. A low tuning required a correspondingly longer string length to achieve the appropriate amount of string tension, making a shorter cello length less feasible.1

Tecchler’s large model and typically full rounded arching contribute to the wonderful bass resonance for which his cellos are admired. Although this cello has been slightly reduced in size, it still retains a generous amount of air space, giving it a powerful tonal palate.

The neatly formed purfling and softly beaded edge are characteristic, as are the locating pins on the top and bottom of the back, just inside the purfling. The top pin of this cello was cut out when the size was reduced but both pins are generally visible on the violins. This is a point of differentiation from the work of Jacob Stainer, who didn’t use locator pins in the construction of his instruments.

The slab-cut back (leading to a quarter cut in some places) is of native Italian oppio (Italian field maple) wood with a varied pattern of narrow intense flames, while the top is from spruce with a wide, prominent grain. A common feature of the spruce found in Tecchler instruments is light-colored figurations running across the grain, known as hazelfichte.

The scrolls on Tecchler cellos are quite consistent and identifiable, with a slender pegbox, especially at the throat; a deeply carved volute; and a broad chamfer leading to a rather large flat eye. In some examples such as this cello, the chamfer has an extended last turn where it finishes at the eye.

With their strong upright stance and slightly low, splayed-out placement on the table, the f-holes reinforce the powerful appearance of the cello. The rounded shape of the nicks betrays a Germanic influence and is a recurring feature visible on many Tecchler instruments, as are the tapered wings that finish in a point at the end. While this is the most common f-hole design on extant examples of Tecchler cellos, there is another type that appears to be inspired by the work of Jacob Stainer. Slightly smaller in size and with broad upper wings, this pattern is similar to the f-holes on Tecchler violins.

While Tecchler violins have rarely been used by major performers, his cellos have enjoyed an illustrious reputation and are only surpassed by the great trio of cello makers: Goffriller, Montagana and Stradivari. This cello is an outstanding  example of Tecchler’s work and an important example of early 18th century Italian lutherie.