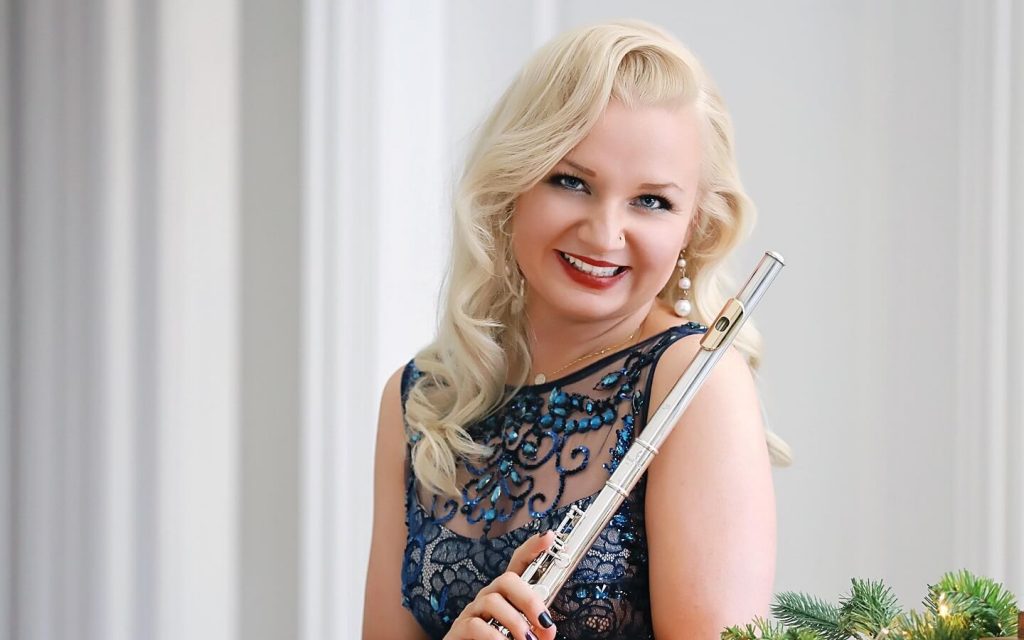 The flute is one of the oldest instruments known to mankind, and has appeared in some form in most cultures. The history seems to begin with one of the 35,000-year-old flutes made of bird or animal bone discovered in recent years in Europe, and ends with the modern concert flute heard this evening. Many cultures have contributed to that evolution but as this evening’s recital demonstrates, a special place belongs to France.

The first great technological advance in the history of the modern flute came in the second half of the 17th century with the so-called “baroque flute,“ generally thought to have been invented in France and certainly brought to a high level of performance at the French court. Among other modifications, this instrument had, in addition to the traditional finger holes, a single metal key to be played by the right-hand small finger. (High tech!) In fairness to Germany, it should be said that German flutists quickly adopted the new instrument and in fact, even from an earlier time the term  “German flute” was commonly used to distinguish the transverse or horizontal flute from the vertical recorder.

An important part of the curriculum at the Conservatoire was a yearly competition, for which prominent composers were asked to write compositions. Over the years, many works written for these competitions have become important parts of the flute repertoire, and, incidentally, the coveted premier prix has been won by many of the world’s finest players. In 1898, Gabriel Fauré, one of France’s leading composers and himself a professor of composition at the Conservatoire, was asked to write such a contest piece. Apparently it did not come easily, for as he wrote in a letter to his good friend, Camille Saint-Saëns: “I can’t think of anything at all that has given me so much trouble.” He needn’t have worried, for the Fantaisie that he wrote has become a staple of the flute repertoire. It opens with a lyrical, dreamy Andante cantabile that allowed a student to demonstrate beauty of tone, followed by an infectious Allegro designed to demonstrate finger virtuosity and tonguing technique.

Debussy is well known for his use of the flute in his orchestral works, but the 3-minute Syrinx for solo flute occupies a special place in the hearts of flutists. The flute played a part in Greek mythology, a fact that has attracted a number of French composers. According to legend, Syrinx was a beautiful maiden pursued by Pan, god of nature. As Syrinx fled the lecherous god’s advances she was turned into a reed. Not knowing which reed was his beloved, Pan cut the entire cluster of reeds, tied them together, and made the flute that is still known either as panpipes or syrinx.

Debussy wrote Syrinx for the play Psychée, written by his friend Gabriel Mourey. It was to be played offstage as “the last melody played by Pan before his death.”  This short piece allows the flutist opportunity to explore all the different colors available on the instrument and has been the prototype for a number of twentieth century solo flute pieces. Incidentally, the piece ends quietly on a whole tone scale, that ambiguous scale so often associated with Debussy which allowed him to stretch the limits of the traditional tonal language of music.

Like many other Russians, Sergei Prokofiev was part of the “brain drain” that fled his country at the time of the 1917 Revolution. Among other places, he lived in Paris for a time and there had the opportunity to hear French flute playing. Many years later, having returned to live permanently in the Soviet Union, he would make use of the sounds that had then inspired him. In 1943, during the chaos of war, Prokofiev’s primary project was an operatic version of Tolstoy’s War and Peace. Needing respite from various frustrations with that work, he traveled to a small town in the Ural Mountains and began work that soothed his nerves. First, it was the romantic ballet Cinderella, and then it was work on a sonata for flute, an instrument that he loved and which he thought had received Cinderella-like neglect. Throughout the nineteenth century few major composers had written substantial works for the flute and Prokofiev wanted to change that. “I wanted this sonata to have a clear, classical sonority.”

The result is an expansive four movement sonata laid out in the same traditional format that had been used for innumerable violin sonatas: an opening movement in time-honored sonata form; a humorous or fantastic scherzo; an expressive, lyrical slow movement; and an exciting, virtuosic finale. The work is filled with gentle lyricism, a quality that Prokofiev, who was often thought of as a “bad boy” of music, believed he was never given sufficient credit for. The sonata was premiered in December of 1943, and soon after, was arranged in a version for violin. Today the sonata is an important part of both flute and violin repertoires.

Good composers waste not and seldom want; self-borrowing is an ancient and honorable practice in music. Fauré’s  Sicilienne went through several recyclings beginning with its initial form as music for a theatrical production. Show biz being the same hazardous enterprise then as now, the theater involved went bust and the project was abandoned. He then arranged the work for cello and piano, a form in which it is still played today. The next manifestation was another theatrical venture: the Sicilienne was incorporated into a production of Maurice Maeterlinck’s play Pelléas et Mélisande. Fauré’s incidental music was arranged by another composer for a small theater orchestra and the prominent solo line of the Sicilienne was played by the oboe. Fauré’s final version was a four movement Pelléas et Mélisande Suite orchestrated by the composer himself, in which the Sicilienne serves as the third movement, the solo line now assigned to the flute.  The version heard today for flute and piano is part of every flutist’s repertoire.

The term sicilienne (siciliano or siciliana in Italian) is for vague reasons associated with Sicily. It is a type of piece with pastoral associations, usually in a melancholy minor key and having a lilting rhythm in 6/8 or 12/8 time, giving it something of the character of a slow gigue.

German composers have of course also made significant contributions to the flute literature. Karg-Elert is today most widely known for his works for harmonium (a type of reed organ) and organ. His early organ works certainly show the influence of his great German predecessor J.S. Bach (who wrote much wonderful music for the baroque flute). He would eventually become something of an internationalist, absorbing other influences including those of such composers as Edvard Grieg, Debussy, and Scriabin. Though his primary instruments were the organ and piano, Karg-Elert played oboe, horn, and saxophone in a military band during the First World War. In the band he sat next to Carl Bartuzat , who would become a distinguished flutist. As a gesture of camaraderie and perhaps to help Bartuzat get his mind off the tedium of military life, Karg-Elert wrote him a set of 30 Caprices, works which today are not only widely used by flutists as very demanding exercises but which also have high musical value.

The 30th and last of the Caprices is a chaconne, a type of variation on a simple repeating bass line or chord progression that was popular in the baroque era. Karg-Elert takes this baroque concept and combines it with a late-romantic chromatic style to produce a work that tests both the flutist’s technical ability as well as musicianship.

Charles Tomlinson Griffes was born in Elmira, New York, and spent most of his working life teaching at a private boys’ school in Tarrytown, New York. In between those two periods he traveled to Germany to study his art. Naturally enough, Griffes’ early works show German influence but before too long he fell under the spell of the French Impressionists and became probably the leading American exponent of the style.

The Poem for flute and orchestra received its premiere in November of 1918, played by flutist Georges Barrère with the New York Symphony Orchestra. The fact that Barrère was the soloist was particularly important. Having himself won the premier prix at the Conservatoire, and then moving to the United States, he was widely credited with being the most important figure in bringing the principles of the French school to this country.

Griffes’ early death at the age of 37 in the post-World War I influenza pandemic is one of the great tragedies of American music.

Chant de Linos is another work written for the competition at the Paris Conservatoire. In this case, the winner of the 1944 first prize was none other than the legendary Jean-Pierre Rampal, the flutist who is credited with doing more than any other twentieth century player to establish the flute as a solo instrument.

André Jolivet is yet another French composer with an interest in the myth of ancient Greece. He himself said that his aim was to “give back to music its ancient and original character as the magic and incantational expression of human groups.” The myth here is that of Linus, the musician and son of Apollo who passed on his art to Orpheus and Herakles. In the composer’s own words, this work is a “type of ancient Greek threnody: a funeral lament, a plaint interrupted by cries and dances.”

Laid out in one single movement, the music does indeed present us with melancholy passages of lament alternating with anguished cries and frenetic dances. For his musical materials the composer uses an archaic mode (scale) which gives the music its exotic character. The rhythmic structure often uses highly irregular rhythms in 5/4 and 7/8. Though written for a competition and obviously demanding extreme technical proficiency, it is clear that Chant de Linos has a much more serious intent than demonstrating mere virtuosity.

Return to the concert page

Daniel Maki holds the degree Bachelor of Music and the Performer’s Certificate in Flute from the Eastman School of Music, as well as a Master’s degree in Flute Performance from Northwestern University. Mr. Maki has been a faculty member at various institutions, serving for a number of years as Instructor of Flute at the Eastman School, Instructor and Resident Flutist at the Kinhaven Summer Music School in Weston, Vermont, and Instructor of Flute at Judson University in Elgin, Illinois. He is now Professor Emeritus at Elgin Community College, where he was for many years Professor of Music, teaching primarily music theory. Mr. Maki has a long association with the Elgin Symphony Orchestra, serving at various times as manager, Principal Flutist, and Pre-Concert Lecturer. He has written program notes for the Elgin Symphony for several decades and continues in that capacity. He is also a frequent pre-concert lecturer for Chicago Music of the Baroque.
View Calendar