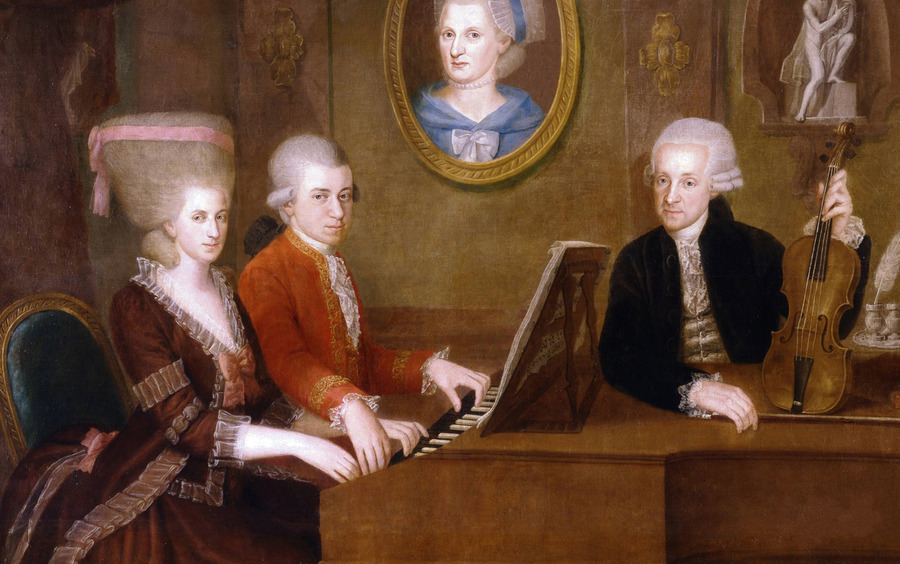 On September 23, 1777, Mozart left his native Salzburg bound for Paris by way of Munich, Augsburg, and Mannheim. Mozart and his ever-ambitious father, Leopold, hoped to secure a position for the young composer away from Salzburg and the court of their current employer, Archbishop Colloredo. Leopold remained at home under Colloredo’s employ and his wife, Anna Maria, accompanied their son on the trip.

Leopold would not see his wife again. Anna Maria died suddenly of an undiagnosed illness in Paris in July 1778. Some have connected the sonata K. 304 of the same year to Anna Maria’s death, but this tragic event and the piece are unrelated. K. 304 is the only one of Mozart’s sonatas for violin and piano written in a minor key and conveys a deep pathos. But work on the sonata was begun in Mannheim in the spring of 1778 before the Mozarts traveled to Paris, and Mozart finished K. 304 before Anna Maria’s sudden demise.

Mannheim was home to one of the finest orchestras in Europe at the time. The much-revered musical culture and brilliant string playing Mozart encountered there must have influenced the direction he took the sonata. The work is remarkable for a degree of drama and dynamic contrast that anticipate a romantic Sturm und Drang ethos, two decades before Beethoven would lead the charge towards Romanticism in Vienna. It remains the most often played of his works for violin and piano.

The works of Brazilian composer Dmitri Cervo have been performed by more than 40 orchestras in Brazil and abroad. Cervo’s piece Cantiga, is based on narrative songs about miracles or hymns of medieval Galician-Portuguese origin in praise of the Holy Virgin.

Emmy-nominated composer Kevin Wilt is a self-described classical music evangelist. He is Composer-in-Residence and Chair of the Florida Atlantic University Department of Music in Boca Raton.

Wilt’s Out In The Storm for violin and piano was written for and dedicated to Heather Coltman and Laura Klugherz. It is a narrative work that paints a picture in sound. Small gestures from the piano, a somewhat ominous melody in the violin, and distant thunder all signal a coming storm in the first movement. In the second movement, the rain starts to fall randomly, eventually forming a rhythm against which the violin plays a melody. The rain becomes stronger, and the piano plays a first nearby thunderclap at the bottom of the register. In the third movement, the piano plays more thunderclaps while the violin line represents the winds reaching full strength. Finally, the storm clouds clear, and the violin returns to the original melody, now subdued. As the piece closes, we hear the last ray of sunlight peeking over the horizon.

The Mid-Autumn Festival is one of the four traditional Chinese festivals dating back 3,000 years to moon worship in China’s Shang Dynasty.

In the Zhou Dynasty (11th century-256 B.C.), people held ceremonies to greet winter and worship the moon when the moon became full in mid-autumn. During the Northern Song Dynasty (960-1127), the festival was formalized to be held on the 15th day of the eighth lunar month, a date when the moon is supposedly at its fullest and roundest. To the Chinese people, the full moon symbolizes family togetherness, and the Mid-Autumn Festival is also known as the Family Reunion Festival.

The great Polish virtuoso violinist Henryk Wieniawski was part of the great romantic tradition of composer-performers, which included luminaries such as Nicolo Paganini, Franz Liszt, and Frédéric Chopin.

As a violinist, Wieniawski thrilled the public with dazzling technique, singing lyricism, and human tenderness. As a composer, he wrote music for concerts and salon performances, using popular forms of the time, such as fantasies, variations, and miniatures.

Wieniawski wrote his Capriccio-valse, Op. 7 sometime before 1854, probably while he and his pianist brother Józef were on a concert tour of Russia in 1852, with revisions subsequently made for the autograph before publication in 1854. It was first published in Leipzig by Kistner and later in Paris by Girod. Various other editions followed, some with errors that aroused the ire of the composer.

The work’s title references the caprice genre frequently employed in the 19th century, with valse indicating a light dance in three. The form is an introduction, rondo, and coda, which serve as a vehicle for the performer’s display of virtuosity and sumptuous tone. Wieniawski initially wrote this piece for his own performances, but it has continued to delight audiences (and challenge violinists) ever since.