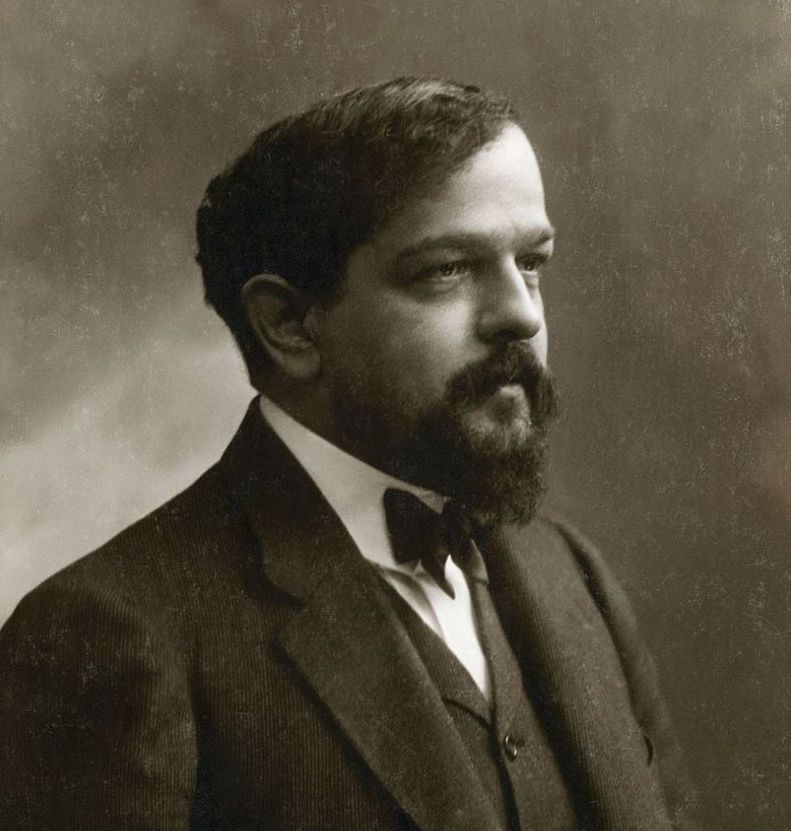 Claude Debussy’s suggestive and evocative works are usually labeled as Impressionism. Debussy (1862-1918) was able to give his music the transparency and ephemeral quality of the best Impressionist art. Once, after a particularly satisfying rehearsal of his Images for orchestra, Debussy said, “This has the air of not having been written down.” But there was another artistic movement which exerted an even greater influence on the life and work of Debussy: Symbolism.

When he published the Symbolist Manifesto, the Greek poet and art critic Jean Moréas (1856-1910) wrote that Symbolism was inimical to “plain meanings, declamations, false sentimentality and matter-of-fact description.” Moréas wrote that the purpose of Symbolism was to “clothe the Ideal in a perceptible form” and  “whose sole purpose was to express the Ideal.”

One of the greatest Symbolist painters, Odilon Redon (1840-1916), wrote: “My drawings inspire, and are not to be defined. They place us, as does music, in the ambiguous realm of the undetermined.”

Much the same could be said about Debussy’s music, whose very ambiguity is a large part of its appeal.

L’après-midi d’un faune (The Afternoon of a Faun)

Stéphane Mallarmé (1842-1898) was one of the most renowned Symbolist poets. His work was greatly influenced by Charles Baudelaire (1821-1867), whose poetry is seen as anticipating Symbolism. Writing to his friend, the physician and Symbolist poet Henri Cazalis (1840-1909), Mallarmé insisted that he wanted his poetry ‘to depict not the thing but the effect it produces.’

L’après-midi d’un faune (The Afternoon of a Faun) is one of Mallarmé’s most famous poems. Composers like Maurice Ravel (1875-1937) and Darius Milhaud (1892-1974) have been drawn to its dreamlike depiction of a faun waking from an afternoon slumber and his rendezvous with various nymphs. But the most successful musical expression of Mallarmé’s poem is Debussy’s Prélude à l’après-midi d’un faune (Prelude to the Afternoon of a Faun.)

French composer and conductor Pierre Boulez (1925-2016) believed that modern music began with Debussy’s Faun. “The flute of the Faun brought new breath to the art of music,” Boulez wrote. “What was overthrown was not so much the art of development, as the very concept of form itself… the reservoir of youth in that score defies depletion and exhaustion.”

Mallarmé reportedly believed that his poem was adequate and did not need to enhanced by music. After hearing Debussy’s tone poem, however, he changed his mind.

“I have just come out of the concert, deeply moved,” he wrote to Debussy. “The marvel! Your illustration of the Afternoon of a Faun, which presents no dissonance with my text, but goes much further, really, into nostalgia and into light, with finesse, with sensuality, with richness.”

Belgian playwright and poet Maurice Maeterlinck (1862-1949) was another influential figure in the Symbolist movement. Winner of the 1911 Nobel Prize for literature, Maeterlinck was one of the most esteemed European writers of his time. Like Mallarmé, Maeterlinck was not so much interested in depicting reality, but the truth behind reality.

His play Pelléas et Mélisande is one of the finest literary examples of Symbolism. The play has a vague medieval setting and only the slightest of plot points and action, but in spite of its vaporous qualities, there was something about Pelléas et Mélisande that fired the imaginations of several, very different, composers.

“The drama of Pelléas which, despite its dream-like atmosphere, contains far more humanity than those so-called ‘real-life documents’, seemed to suit my intentions admirably. In it there is an evocative language whose sensitivity could be extended into music and into the orchestral backcloth.”

Maeterlinck, however, was not happy with the production. He was angry that his lover, the soprano Georgette Leblanc, was not given the role of Mélisande. Maeterlinck actually physically threatened Debussy over the matter. Although Maeterlinck publicly denounced “Pelléas and Mélisande” and washed his hands of the opera, he eventually saw it two years after Debussy died.

“In this affair (Pelléas et Mélisande) I was entirely wrong and he (Debussy) was a thousand times right,” Maeterlinck is reported to have said.

Another important figure in the Symbolist movement was the Italian author Gabriele D’Annunzio (1863-1938). In 1911, Debussy accepted a commission to compose incidental music for D’Annunzio’s latest play, Le Martyre de saint Sébastien (The Martyrdom of St. Sebastian). It tells the story of a Roman soldier who converts to Christianity and is ultimately martyred by being shot with arrows. The play is very much in keeping with the medievalist aesthetic so popular with the Symbolists and the closely-related Pre-Raphaelites.

Two Ballets Russes stalwarts were a part of the original production. Léon Bakst (1866-1924) designed the sets and costumes and Michel Fokine (1880-1942) provided the choreography. Although Debussy’s complete score is rarely performed today, the suite from Le Martyre de saint Sébastien has been recorded several times and is a favorite with many Debussy connoisseurs.

Fall of the House of Usher

An ongoing project which Debussy never completed was an operatic version of The Fall of the House of Usher by Edgar Allan Poe (1809-1849). After Baudelaire translated Poe’s works into French, the American author became a sensation in France and an important influence on the Symbolist movement.

The Fall of the House of Usher was part of a planned Poe double-bill. Debussy had long been working on an opera version of Poe’s The Devil in the Belfry for several years before abandoning it in 1911. In mid-1908, Debussy signed a contract with New York’s Metropolitan Opera to stage the premiere of Devil in Belfry and another opera to be composed by Debussy.

Debussy was inspired to base the other opera on a story by Poe, the much darker The Fall of the House of Usher. It was a dark time in Debussy’s personal life as he was attempting to complete the opera. He had been informed that he was dying of rectal cancer.

The British musicologist Robert Orledge wrote, “Debussy began increasingly to identify with Roderick Usher, whose mental breakdown Poe had identified with the crumbling House itself.”

Debussy was able to complete a libretto and compose some of the music before succumbing to his disease in 1918.

“All that we see or seem, Is but a dream within a dream,” wrote Poe. Debussy’s music, especially his overtly Symbolist works like Pelléas et Mélisande, certainly conveys this dreamlike quality.

But Debussy was an instinctive composer, and however much Symbolism or Impressionism were important influences, the composer himself thought his music was beyond any theories.

Once, while speaking with one of his former teachers, Debussy said, “There is no theory. You merely have to listen. Pleasure is the law.”