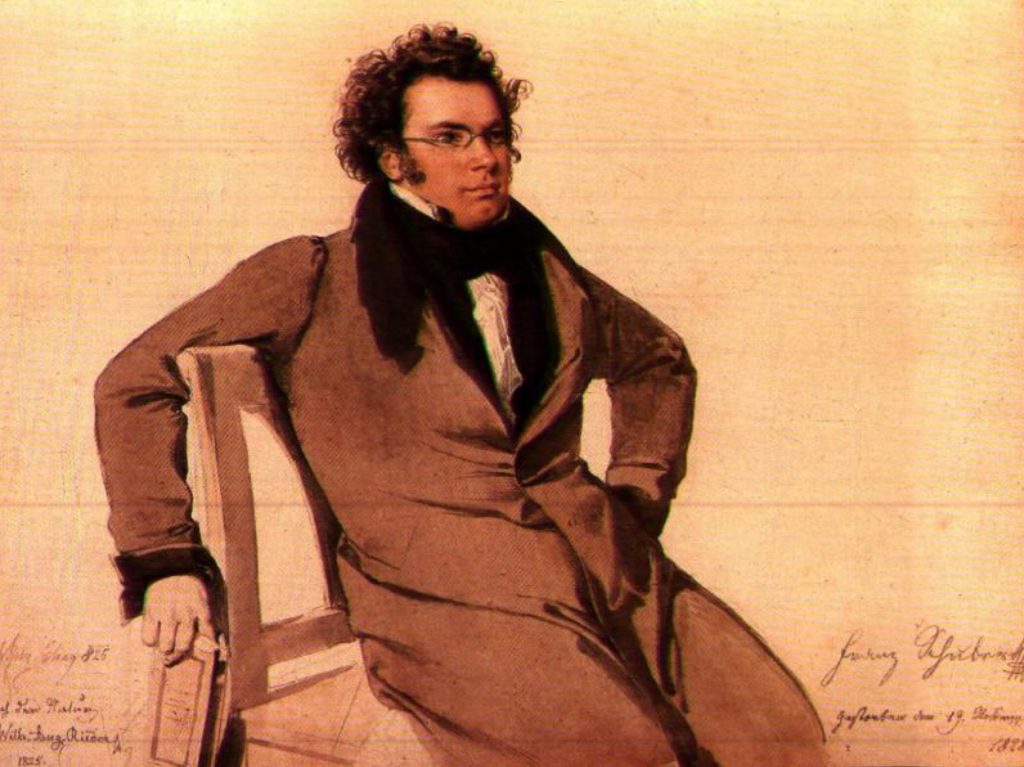 Franz Schubert and the “Wanderer” Fantasy

Franz Schubert (1797-1828), composer of the “Wanderer” Fantasy, may have been the most prolific musical prodigy the world has known. Schubert grew up in a large, modest household in suburban Vienna. His father was a schoolmaster and his mother a domestic servant. They lacked the means, ambition, and social status to effectively pursue connections for their gifted child. But the Schuberts did have music in the home. Franz initially studied violin with his father and piano with his brother. Soon he had outstripped their abilities and come to the attention of composer and teacher Antonio Salieri (1750-1825). Salieri gave Schubert instruction in composition but did little to advance public awareness of his gifted young student.

In contrast, the most famous of all prodigies, Wolfgang Amadeus Mozart (1756-1791), was notoriously paraded around Europe as a child by a father who was eager to advance his own position through the gifts of his son. Felix Mendelssohn (1809-1847), another miraculous prodigy, grew up in a family of great means and was protected from early exploitation by his cautious parents. The adult careers of both Mozart and Mendelssohn were jump-started by their fame as prodigies. Not so for Schubert, who remained largely undiscovered in his own lifetime despite his vast output.

Schubert composed hundreds of lieder, choral works and string quartets, piano trios, arias, overtures and symphonies while still in his teens. But his astonishing talents only began to be known to the public through performances of his works from around 1818. Schubert began successfully selling subscriptions to his lieder from 1821 and so initially became known as a composer of songs first and foremost. Many of his most admired instrumental works weren’t published until after his death in 1828. By the end of the 19th century, Schubert’s name had become a household word mostly by way of posthumous admiration.

Sadly, none of these three composers lived to see his 40th birthday. Mendelssohn died at the age of 38, leaving behind some 400 works. Mozart died at 34, yet left us with over 600 pieces. Schubert died in 1828, when he was only 31. It is a testament to the breakneck speed of his work that in such a short life, Schubert managed to compose over 1500 works, many of them masterpieces. The “Wanderer” Fantasy is among those.

Origins of the “Wanderer” Fantasy

The “Wanderer” Fantasy—Franz Schubert’s Fantasie in C major, Op. 15 (D. 760)—was written in 1822 and published in 1823 by Cappi and Diabelli. To make time to write the work, Schubert stopped work on what would come to be known as the “Unfinished Symphony” in the hope of earning a commission for a piano work from the wealthy patron, Carl Emanuel Liebenberg von Zsittin. Unfortunately, no such payment was forthcoming. The “Unfinished Symphony” remained unfinished and the “Wanderer” Fantasy wasn’t performed in public until 1832, long after the composer’s death.

The piece is based on Der Wanderer, D. 489, a lied first composed by Schubert in 1816 and revised in 1821. Embedding one of his best-known songs in an instrumental work may have been an attempt by Schubert to capitalize on his reputation as a composer of song.

Der Wanderer is set to a poem of the same name by Georg Lubeck (1766-1849). The figure of “The Wanderer” has had a long history in European culture, appearing in various forms over time. Lubeck’s Wanderer speaks in the first person of the loneliness and disorientation of being a homesick foreigner in a strange land. Like the poem, the song is filled with a sense of nostalgia; desperate, solitary moments in the text are resolved in major keys. The Wanderer sees happiness but it remains unattainable. Schubert certainly identified with these sentiments. The composer faced many challenges in his short life leading to a sense of alienation and what contemporary scholars have suggested was serious depression. Schubert composed the “Wanderer” Fantasy in 1822, a year in which he faced ruinous financial, social and health problems all at once. It was a deeply unhappy time for the composer but he remained productive nonetheless.

Form and Structure of the “Wanderer” Fantasy

In the “Wanderer” Fantasy, Schubert manages to convey the longing, loneliness, and nostalgia of the poem and song alongside more triumphant material. Schubert opens the work with a sonata form movement in C major. The second movement is a melody from the 1816 song, cast as the theme for an elaborate set of variations. Schubert writes in the key of C♯ minor, preserving the original key of the song, and creating a deliberately challenging key relationship with C major, the home key of the first movement. The variations are followed by a sonata-form scherzo, and lastly a finale which begins as a fugue before breaking into a series of virtuoso episodes derived from thematic material.

Each movement of the Wanderer Fantasy is constructed of elements derived from the song, tying the whole work closely to the original work and giving the piece a satisfyingly organic foundation. The four clearly defined movements are written with connective transitions so as to be played without breaks, creating epic scale and a sense of a journey traveled for the listener.

The “Wanderer” Fantasy and Franz Liszt

Drew Petersen: Meeting the Challenges of The Wanderer Fantasy

The “Wanderer” Fantasy is considered by many to be Schubert’s most technically challenging work for solo piano. Fistfuls of fast arpeggios, treacherous passage work and florid, and exposed filigree all must be handled without breaking the sense of drama and poeticism that the piece requires. It takes a special kind of artist to do this music justice. The young American pianist Drew Petersen is just such an artist. His technical prowess is ample without ever being in the way, and his sense of drama and warmth of tone create a wide range, from heroic to delicate in his reading of The “Wanderer” Fantasy. An interesting side note is that Petersen himself was considered a prodigy whose extraordinary skills as a youngster were documented in the film Just Normal by Kim A. Snyder and in the book Far From the Tree by Andrew Solomon.

A stunning video of Drew Petersen’s performance of the Wanderer Fantasy will premiere on This Week from Guarneri Hall on groupmuse.com on November 1, 2020 at 2 PM CST. The video was filmed and recorded in Guarneri Hall in January 2019 a few days after his live solo concert in Guarneri Hall. Stefan Hersh produced the video with audio engineer Christopher Willis and videographer Michael Grittani.