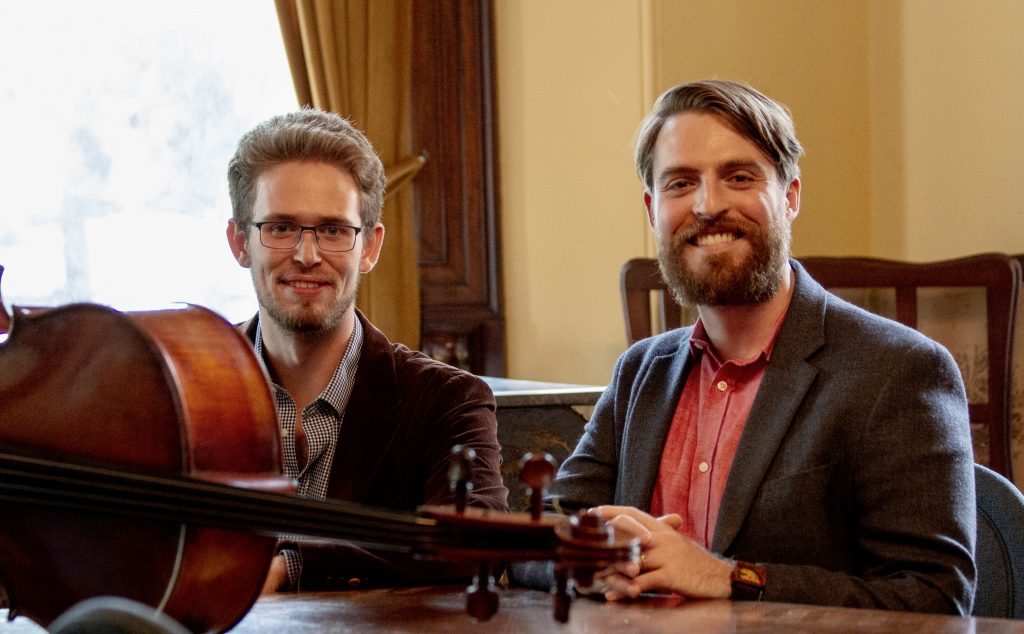 Not Your Grandma’s “New Music”

Contemporary music is often dismissed as unapproachable. The very idea of a “composer” too often conjures the image of an out-of-touch intellectual. The thinking might go like this: why listen to something unfamiliar, unpleasant, and disconnected from the rest of modern life? Cellist Zachary Mowitz and composer Nick DiBerardino are collaborating on a project aimed at shattering these misconceptions and welcoming a broad new audience.

Zach and Nick originally founded Suite Talk back in 2018 as a series of interactive lecture recitals designed to destigmatize new music, reveal its appeal, and tell the human stories animating contemporary classical music. Zach and Nick have used the Suite Talk platform to explore the deeply human elements that go into music – illuminating the cultural touchstones inspiring each composer, the physical efforts of the performer, and most of all, the personal connections between musicians’ lives and their work. Suite Talk has invited listeners to hear from the artists directly through interviews and performance demonstrations, allowing inside access to deeply personal details about the conception, creation, and execution of the music. The goal is to deepen the listening experience, enhance a sense of connection between artist and listener, and to shine a light on the many ties between the music and its creators with the biggest issues facing the world at large. PBS WHYY featured Suite Talk in a documentary about Nick’s work, focusing on the pioneering series of lecture recitals. This documentary helped Zach and Nick impact new listeners across the Philadelphia area. Now the team is ready to reach further.

Widening the Circle, Empowering the Creators

Zach and Nick’s latest recording project embodies the Suite Talk approach, introducing a wider audience to two engaging new works: Oracle by Nick, and Suite for Solo Cello, by Ira Mowitz, Zach’s dad. The project will empower each composer in the representation of their works on video, providing an intimate and more complete view of the composers’ creative impulses and of the relationship between composer and performer.

The new Suite Talk project centers around the creation of narrative-driven art videos for Nick’s Oracle and Ira’s Suite. The videos will tell meaningful stories derived from the messages of each work. Each of the videos will be produced in collaboration with the composer to adhere to their vision of the music. Videographer Mike Grittani will serve as Director of Photography, working closely with Nick and Ira in the process. The finished videos will be released alongside artist interviews, video program notes, and short videos featuring related pieces of classical music, all tied together into an immersive and informative digital concert experience. Ira’s Suite and Nick’s Oracle are representative of two different ways composers are merging the classical tradition with contemporary culture. Listeners will be drawn into a personal dialogue with the composers and the performer, providing a clearer appreciation for the human elements that make the living classical tradition so enduringly compelling. The result will be an online representation of the very best of Zach and Nick’s Suite Talk, reconnecting new music to broader culture by exploring the composers’ deep connections to contemporary society, to classical music, and to one another.

The project is being developed in close partnership with Guarneri Hall NFP, a not-for-profit music and music education incubator in Chicago, where the videos will be produced.

Oracle: A New Take on a Timeless Story

Nick’s work Oracle vividly recounts stories of the Oracle at Delphi, one of the most powerful women in antiquity. In Oracle, Nick employs a blend of arresting new sounds and tried-and-true approaches to musical storytelling. Nick draws upon two contrasting accounts of the Oracle’s voice: one frenzied and the other controlled. These fundamentally different accounts of the world are woven together, giving them relevance to conflicts faced in contemporary society. Oracle raises questions about divine guidance for the world and how we might actually respond to the counsel of a wise female voice. The art video of this music will be designed to give life to both an intimate, modern interpretation of the Oracle story and to the ancient storytelling tradition from which it comes.

Onward From Bach: Dancing Around the World

Ira Mowitz’s Suite for Solo Cello flows directly from a core pillar of solo instrumental writing: the Solo Cello Suites of J.S. Bach. Ira’s new suite infuses the tradition of Baroque counterpoint and Dance with a fresh, broad approach to movement and sonority. The courtly dances of Versailles, Argentine tango, the strumming of Renaissance bards, and the American Jazz of Ira’s youth all collide and complement one another in a joyous musical world. Ira’s Suite for Solo Cello serves as an auditory travel log – perfectly embodying the mobility of music and dance on our “small” modern globe and the way new classical music can engage with the past while staying fully present in the sounds of today. Very much a collaboration between father and son, composer and performer, Ira’s Suite derives from the sounds of Zach’s lifelong journey studying and performing the Bach Suites, in which Ira was both witness and parental guide.

Alongside the new works, Zach will record the Prelude from Bach’s Sixth Cello Suite, the original inspiration for Ira’s Suite. The project will also include videos of the first movements of Kaija Saariaho’s Sept Papillons and Benjamin Britten’s First Suite for Solo Cello, both of which directly served as direct inspirations for Oracle. Finally, a Coleridge-Taylor Perkinson Lamentation will be included to connect Ira’s work with Nick’s. Conversations between Zach and both composers will illuminate and draw out these connections, offering a fun and informative historical context for listeners while further personalizing the connections between artists and audience.

To join forces with Nick and Zach and be a part of making the digital version of Suite Talk another success, make a donation to the project!

Your donation will help bring Suite Talk, an interactive lecture recital series, to a digital platform in partnership with Guarneri Hall NFP.

Special thanks to Zachary Mowitz and Nick DiBerardino for providing the content for this piece.