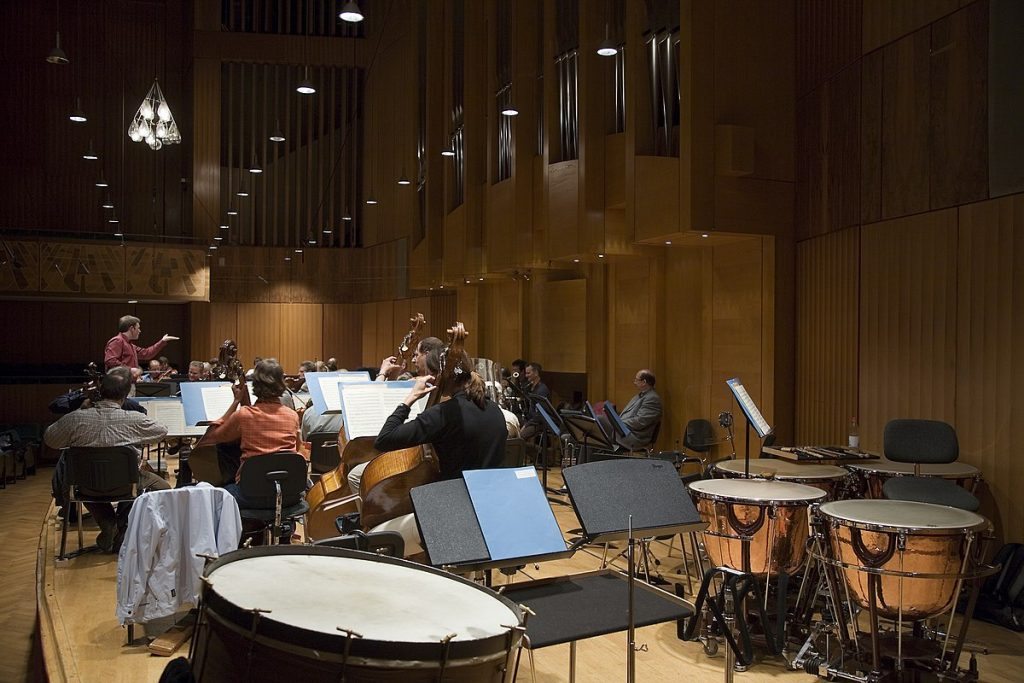 The Classical Music Rehearsal: Shedding Light on an Opaque Process

A great classical music performance has us marveling at the power of the music and the artistry of the orchestra or ensemble on stage. But what transpired beforehand to enable the musicians to collectively deliver the performance we are hearing?

It’s no secret that rehearsals are scheduled practice sessions by which performers prepare public presentations. But the actual process of preparing a musical ensemble for performance is mysterious for most listeners. Understandably, most performers are reluctant to expose the public to the roughness, miscues, and inconsistent musical experiments that rehearsals often include. So opportunities for the public to observe true working rehearsals are relatively rare, and the rehearsal process remains an enigma.

The Symphony Orchestra Rehearsal: A Single Point of Authority

In an orchestra rehearsal, a conductor leads the large assembled force through the material, establishing tempi and variances, coordinating ensemble and intonation, and indicating musical subtleties, mostly with their hands. In an orchestral setting, the conductor has authority over all interpretive decisions as well as the workflow of rehearsals; orchestral rehearsals don’t include any substantive collaborative dialogue. As a practical matter, dialogue and interpretive nuance take a back seat to expedience at orchestral rehearsals.

Chamber music is collaborative at its essence. The members of a chamber music ensemble share collective responsibility for the interpretive decisions, as well as for the technical issues that must be worked out to ready a piece for performance. The performance circumstances, repertoire, and the individual artistic imperatives of the musicians in the ensemble all play a part in the chamber music rehearsal process. Because those details vary, the rehearsal process itself also varies. Where a professional string quartet might devote 20 hours a week to rehearsal for a limited repertoire, a group of highly experienced freelance chamber musicians coming together at a festival might only spend a total of two hours rehearsing a standard work before a performance. New works often take extra time to organize and some pieces are famously thorny to put together, while others seem to come together quite easily. In general, chamber music rehearsals can be less efficient than orchestral rehearsals, but the process of artistic collaboration can be fascinating and stimulating despite the challenges for the individual performers.

Many orchestras present a few open rehearsals annually, inviting a small group of board members and fans hoping to gain an inside view of the musical preparation process. But open orchestral rehearsals are rarely “true” rehearsals. They are nearly always staged to show the orchestra and conductor at their best, with riskier preparation work taking place behind closed doors at other times.

Even if open symphonic rehearsals don’t reveal much of the true rehearsal process, they can still be interesting and edifying. For example, they can illuminate some of the interpretive impulses of a conductor, and provide insight into the chemistry between a conductor and an ensemble.

The concepts of inclusion and community are integral to NEXUS Chamber Music’s mission of presenting exciting, unique concert programs with an intimate and personal feel. The value of musical events – and by extension, all artistic presentation – relies on the inclusion and engagement of our wonderful audience. NEXUS Chamber Music’s inaugural open chamber music rehearsals are imagined as a way to bring curious listeners behind the curtain to experience the music more closely to the way performers do. The superb acoustics of Guarneri Hall, where every spoken word is perfectly audible, make it a perfect space in which to observe the rehearsal process.

As performers, we often only focus on the finished product, when in fact the process is just as interesting. True open rehearsals offer an opportunity for music lovers to better understand these great works as well as a glimpse of our process of bringing them to life.

NEXUS Chamber Music open rehearsal attendees will hear classical chamber works played in their raw state, and be able to observe the process of musical analysis and technical burnishing through which NEXUS Chamber Music brings each work to the high level of detail and finish for which they have become known. Each open rehearsal will be followed by a Q&A session for audiences to ask questions about the observed work process and to have a chance to deepen the connection between audience and performer.